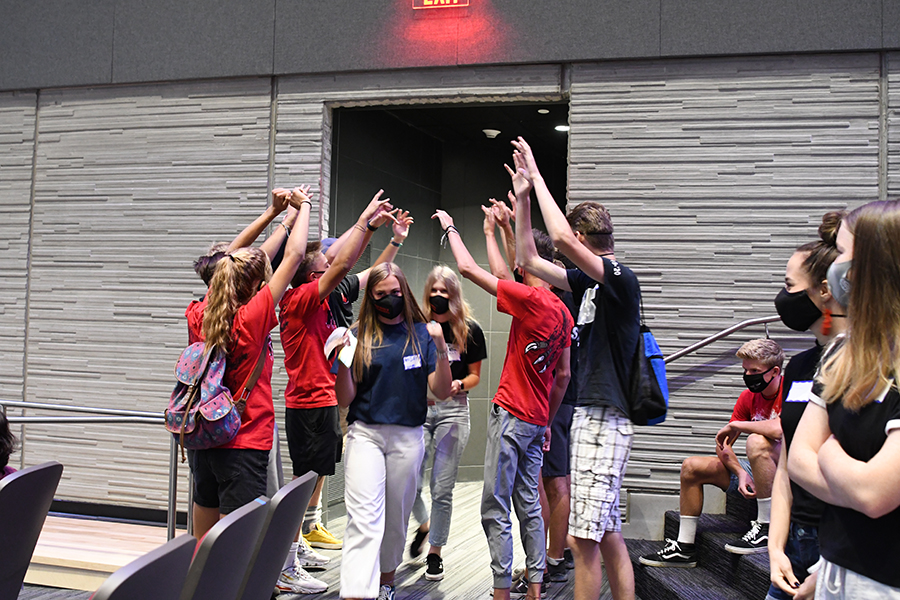 Members of student government welcome students to this year’s Freshmen Orientation the week before school began.

"Soar to New Altatudes" SBO theme for the year

Covid-19 has thrown major curveballs in everyone’s life and procedures and the start of school and hello assembly is caught in the whirlwind. Student Government has been working tirelessly to welcome students with this new normal by creating a video to get students excited for the new year. It may not be ideal, but students will still be able to see various performances from Dance Company, Ballroom, and Drum Line.

SBO’s have chosen “Soar to New Altatudes” as this year’s uniting theme.

It’s a challenge for sure according to Student Body Officers. “When you’re at the assembly, you have engagement and everyone is having a good time,” Autumn Engstrom explained, “When you video it, it’s hard to have the same atmosphere and feeling of coming back to school.”

Assembly or video, they both take countless hours of effort and time. Audio Visual Officer Dawson Lewis estimates he spent 35-40 hours filming and editing this year’s production. “I stayed up all night on Tuesday finishing the video,” Lewis said.

Lewis’s favorite part about making the video comes from the creative side. He is passionate about photography and enjoys “seeing what he can make out of a scene and then editing it into a final product.”

Autumn Engstrom reported that. “…the majority of the school was probably involved in the making of this video”. The Student Government teamed up with multiple groups of people throughout the school. These groups included dance teams and the Alta Drum Line. Watching these groups in this video will allow students to see people they know do amazing things and feel a sense of Alta Pride. A lot of things may be different this year, but Student Government will make sure that school spirit remains strong.

Students watched the two videos in advisory, one on Thursday and another on Friday of the first week of school.