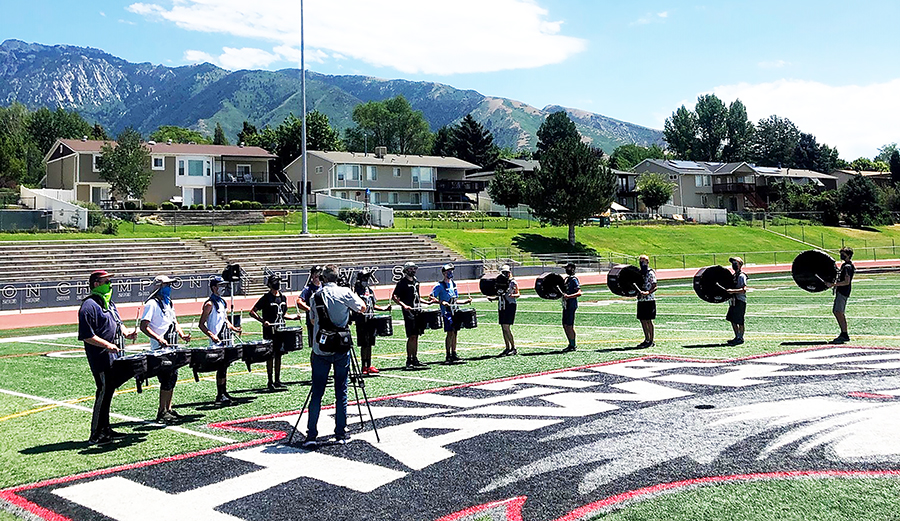 The Marching Band worked all summer to develop their routine to the theme “The Sun will Rise.”

Marching Band Endures Sun, Shade, and Rain as They Prepare for their Upcoming Competitions

This year's theme "The Sun Will Rise" is a metaphor for 2020. The band's optimism for the future keeps them going day after day.

As the cars finish streaming out of the staff parking lot on an average school day, the space is refilled with students, marching band students, that is. They practice under the beating sun on top of the black top.

Band Director Caleb Shabestari is impressed with student perseverance to endure high temperatures and long hours of practice. “They have been amazing about social distancing and wearing masks,” Shabestari said. “They are working harder than ever in a very strange time.”

Hard work is just part of the deal for the Marching Band; it is very time consuming and physically demanding. According to band member Andrew Mellon, students started the summer with four hour practices every Wednesday; by the end of July they were spending all day four days a week working on music and field formations. Their final summer rehearsal was a band camp that ran from Monday through Friday from 8 a.m. to 8 p.m.

Band competitions begin this Saturday at Herriman High School.  Alta’s theme “The Sun Will Rise” consists of everything relating to the sun according to band member Andrew Mellon. The band is playing a Latin tune classed “Suntan,” a lyrical ballad called “With Each Sunset,” and they are ending with Elton John’s “Don’t Let the Sun Go Down on Me.”

“It’s a positive show that really is a metaphor for 2020,” Mellon said. “Everyone seems to be struggling in their own way this year with stress, isolation, or anxiety. The Sun Will  Rise and the Marching Band is sharing that optimism.”

It’s obvious that Marching Band is a not for the weak. Many hours over the summer and more hours after school keep this group busy from sun up to sun down. “It’s a TON of hard work. You’re working your butt off on the football field during the hottest weeks of the summer and some of the coldest weeks of the fall. It’s very physically demanding as well as mentally demanding, band member Shayla Baird said. “You have to run to random points on the field with an instrument in your hands-some of which are really heavy-feet in time at 180 bpm, all while  playing your music memorized.”

When asked how she balances her schedule with marching band, Anna Arnold said it’s a struggle that she and her fellow band members deal with on a daily basis.

“First, you have to be ahead on the music and drill as a drum major, and know what your peers are doing more than they know themselves,” Arnold said. “Then, you have to prepare for the worst, and my peers could need me to drop what I’m doing and help them which I will gladly do, but It would cause me to fall back from school work so you need to always keep one step ahead of your homework for the next day.”

The reasons for joining marching band tend to be about enjoying music and finding friends. Baird, “joined because I had nothing to do the summer before my freshman year and I loved it and kept going.”

“Honestly, if there is another band extracurricular I can join, I will,” she added. “Marching band specifically just brings me so much happiness, I love just being e a part of something so unique with people with the same interests as me.”

When asked if she would recommend marching band to new students Anna said marching band changed her life.  She highly recommends it to anyone and everyone. “People might think we are a bunch of nerds in funky uniforms but it’s so much more than that,” Arnold said. “We are a band family, and we accept diversity. No one here is the same. We all are here for each other and we strive to keep a strong culture of positivity and support in our group.”

The band members wish marching band got more attention. They sometimes feel other sports groups get more attention and mention during the morning announcements. Band members spend hundreds of hours doing what they love and that has to be reward enough.

The band will compete in several competitions during this year’s band season. They start off at Herriman High School this coming Saturday, September 26th. Their theme this year is “The Sun Will Rise.”