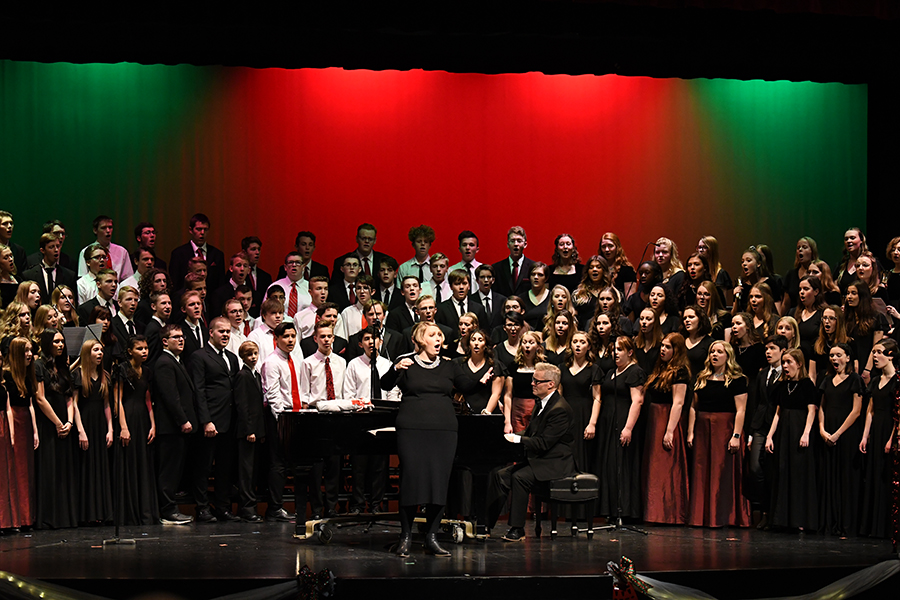 In spite of Covid regulations, the choir classes are still making music the best they can.

Even with masks, social distancing, and an improvised classroom, the Alta Choir Department is still making music and preparing for their upcoming concert October 19.

Concerts are still slated to happen in October even with covid regulations. The auditorium can only be at 25 percent capacity, and all the audiences must be masked. The one hiccup would be if school gets moved to modified or online, this would greatly reduce practice time for the choirs, which means they might not be ready in time for the performance.

To add to stress of getting ready in time, choir classes also can only use half of class time to actually sing. The air needs to circulate out of the room, so the other half of class is used to focus on music theory and sight reading.

But classes are proceeding as normal. April Iund said, “Choir classes are pretty similar, but the focus is more on having fun singing. I want kids to come here and have it be stress revealing and have the interaction and making music be positive.”

Back in March, Alta choir students were devastated to hear that their tour to San Francisco had to be cancelled due to Covid-19.

“I was pretty devastated about the trip being canceled last year, but I just said it’s ok this world is kinda crazy and it’ll get better,” said Ashlyn Richards, a senior in Madrigals as well as a choir officer.

To make matters worse, once school was cancelled, all extracurricular activities were cancelled, and that included the spring concert that the choirs had been working on since January. Their repertoire was supposed to be performed in San Francisco and be judged against other high schools from around the country. Lyrica had set a personal goal to beat Riverton High, one of the choral departments rivals on tour.

Tour for the 2020-2021 school year had to be canceled as well due to district rules of permitting any overnight travel. To make up for it, the choir department is planning a lagoon day where they can ride rides and sing in the park’s amphitheater.

With Covid, the whole school has new guidelines on how to run class. Not to mention the choir classroom has been relocated to the Performing Arts Center (PAC) along with band and theatre.

“Classes are mostly the same except we are six feet apart, we’re in a space that’s not a classroom, which has been ok but it definitely comes with it’s own challenges just in terms of acoustics,” said April Iund the Choral Director. “But other than having a mask on and socially distancing, we’re making music just like we always did.”

The choirs are expecting to use singing masks that the district ordered. They’re large masks that sit situated away from the face and extend farther down the face to allow for full opening of the mouth to produce proper choral vowel sounds.

“I think that just being able to be in class with so many wonderful and kind friends is such a gift, and I’m so thankful that I got to keep that more than anything,” Presley Brady, a senior in Lyrica, said.

The bright side is that even in the midst of a pandemic, students still find a way to make music and be with friends, Ms. Iund said.