Student Government is planning some kind of event to present this year's Homecoming Royalty since Covid quarantines prevented it during Homecoming. 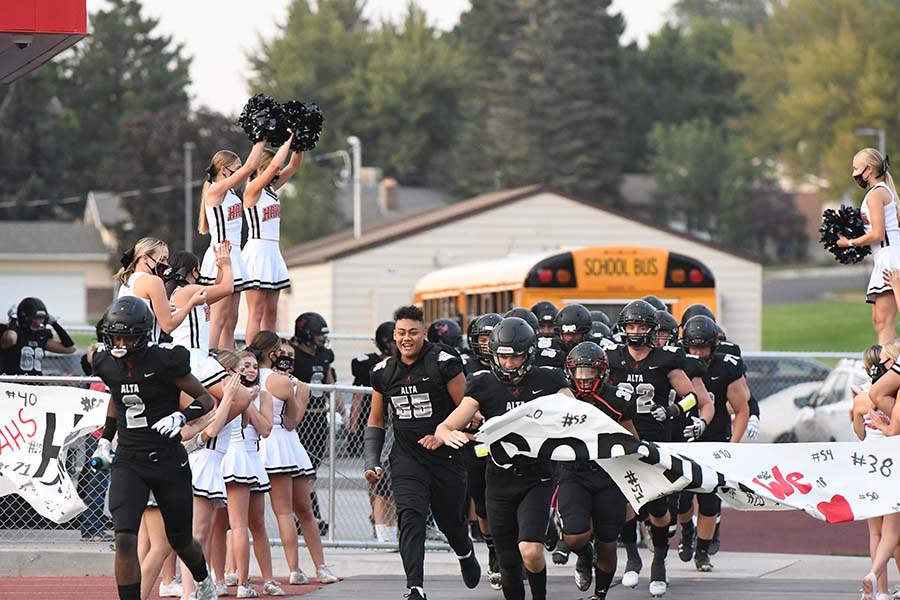 Fottball players rush onto the field in preparation for their Homecoming game with Timpanogos. Alta won 56-13.

Highschool, ¨the best years of our lives!¨ Time to learn how to mature, be as involved as you can, both academically and socially, and, well, of course, dance the night away! Right? Or so you thought.

Scheduled for the end of September, the Homecoming dance for Alta High School was completely cancelled due to the Covid.

There was no assembly, no pageant, no pep rally, no burning of the “A,” no royalty …. Basically, the only thing that happened was the football game and halftime. Dance Company, Ballroom, and the Cheerleaders performed.

The fact that student government was quarantined because three students tested positive for covid, sent everyone, including their advisor Mr Packer, home to quarantine for two weeks.

The homecoming royalty was out too because two of the six people were on quarantine. The royalty has not been announced yet either.

¨This year’s Theme was “A Sky Full of Stars.” Student government started decorating the week before homecoming and completed one hall.

Student Government was also planning on doing spirit days throughout the week, but that didn’t happen either.

Jorja Smith, SBO Homecoming Chair said SBO’s are still trying to present the royalty in some way given the strict covid restrictions of late given that Utah has seen a rapid rise in daily positive cases. “I hope we can still do some things,” Smith said. “I was devastated about not celebrating homecoming. It is my favorite time of the school year. It’s the first thing that allows us to really say “Hey we are a family.”

Smith is sad that Corona has torn people apart this year. “We tried really hard to make homecoming happen, but it didn’t work out,” she said. “I’m sad about it. We hope to be able to burn the “A” later and we’ll announce the homecoming royalty too.¨

Perhaps the saddest aspect of this year’s Homecoming was the breaking of Alta’s 42 year traditions.

Homecoming or lack of homecoming is just the beginning of a strange and different year for the yearbook staff as well. The yearbook usually plans for four full pages packed with photos, but this year, we only have photos of the game and halftime.

Yearbook advisor Denise Ferguson mourned the cancellation of most homecoming events. “Homecoming was a sad week for me,” she said. “We love taking photos at all the events, especially the assembly, pep rally, parade, burning of the A, and the game. Those events involve hundreds of students and make a great statement about student involvement at the school.

“I’m sad that Covid killed a major school event. However, the yearbook will tell the story of this year. We just have to be more creative about doing it.”

With this in mind, Principal, Dr. Brian McGill reminds students of the Covid restrictions that have been taking into action over the past couple months that will also be strongly enforced going back into school. Crowds as we knew them are not permitted in our covid era. The school can have 25 percent capacity at spectating venues both indoor and outdoor. People in different groups should be six feet apart. Other types of gatherings aside from practices and competition have been limited to 50 outside and 25 inside.