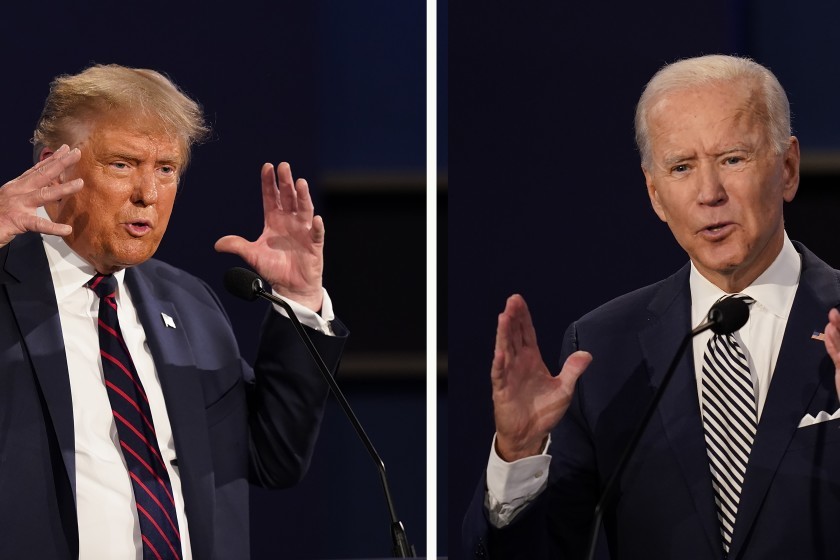 President Donal Trump and former Vice President presented their views at the first presidental debate of this year.

Students weigh in on this year's Presidential candidates.

Vicious vitriol. Wild, outlandish claims. Accusations of foreign influence, collusion,  corruption. And a presidential election in less than a week, at the tail end of a year where extreme polarization, bitter division, and unrelenting alienation have not only been exacerbated, but also come to represent one of the hallmarks of American politics.

Anticipation and fear, civil unrest, and anger on both sides have reached a crescendo, and in the final days leading up to the referendum on the next president, Alta is no exception. Even among students who can’t vote, the levels of emotional investment and worry over the outcome  are almost impressively strong, and surprisingly commonplace.

When asked why this might be the case for her and for many others who are ineligible to vote, Heidi Christensen responded, “The outcome of this election and who becomes president is going to have a direct impact on the literal human rights of my family, friends, and on millions of others. So yeah, I’d say it’s a pretty big deal to me. I’m not at all suprised that others feel the same.”

The high stakes decision of who to actually vote for may only be relevant for the older half of the senior class,  but many Alta students have no doubt as to who their preferred presidential candidate is. This comes in light of the fact that both Joe Biden and Donald Trump are, in the eyes of many, some of the most controversial figures to run for the nation’s highest office in recent history.

Expressing a point of view that seems to be shared by America as a whole, one student remarked, “The saddest thing is that this election, people are just voting for ‘the lesser of two evils.’” Camille Cole agreed, adding that it is this fact that shows just how much and in how many ways “the fundamental system of our government is broken… outdated, and antiquated.”

And yet, while it is true that this sentiment was indeed a significant part of what was a decidedly mixed brew of other emotions earlier this year, in the light of of new division and controversy stemming from everything from the centuries long conflict over police brutality, to something as recent as the President and Senate-majority led push towards the establishment of a conservative-majority court, this “lukewarm-ness” is overshadowed almost completely by a determination on both sides to push forward, to make the best of a poor situation, and above all else, a drive to win.

On who they would vote for, one student said, “Trump could be better, but he’s [still] a lot better than Biden.” Dylan Palmer, another Alta student, agreed, saying, “Not only does Biden not know what he’s saying or doing…  he has committed many crimes.”

However, this viewpoint is equally matched and countered by students who indicated that they would support or vote for Biden. Explaining her choice, Meredith Checketts said, “Donald Trump [may be] an excellent business man, but when it comes to politics, all he does is play games.” Camille Cole added, “Biden would be a better president not only because he is a better person; he will actually treat America like a country…  not like a reality-TV show… Biden stands for universal human rights. Trump wants to take them away.”

November 3rd is quickly approaching. The heated rhetoric from the candidates has only grown more fiery; more incendiary, while also promising to be the only ones capable of bringing peace and stability; of “healing and uniting” the nation, and yet, with each of their every remarks and actions taken, factionalism among Americans only worsens. Fear only compounds.

Halloween may be the societally designated day to ‘be afraid,’ and has indeed largely ‘snuck up’ on us. However, November 3rd is also quickly approaching. And for many, the results will be far real, and more terrifying.