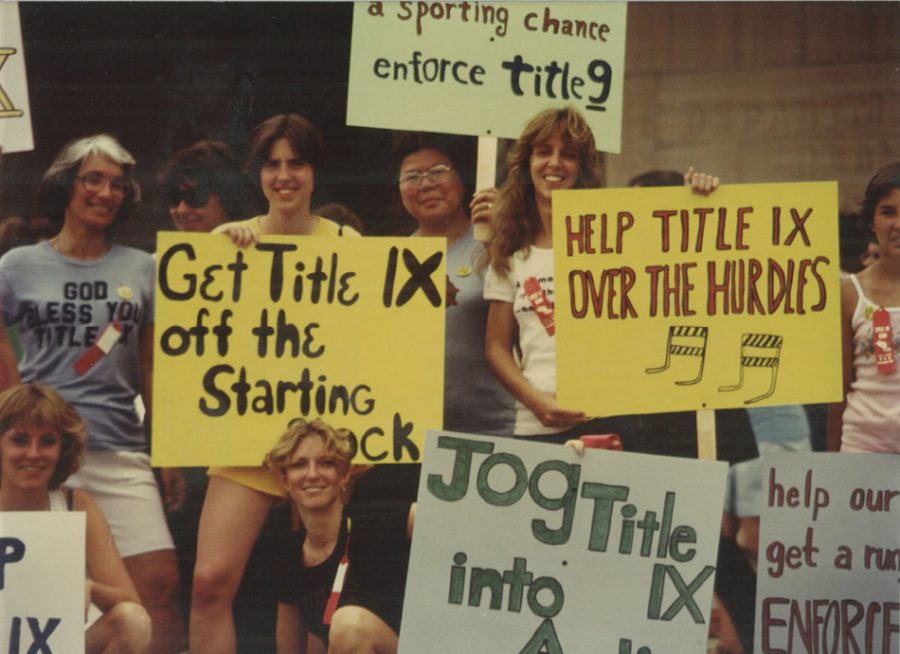 This photo from the 2008 documentary “License to Thrive: Title IX at 35” exposes inequalities between men’s and women’s sports programs across the country.

Title IX: Women’s Equality in Sports is Still a Work in Progress

Since the beginning of time, women’s sports have been victim to discrimination. Even Baron Pierre de Coubertin, the founder of the modern day Olympics, stated that, “No matter how toughened a sportswoman may be, her organism is not cut out to sustain certain shocks.” As a society, we have progressed forward in trying to put an end to sexism in athletics. How far have we come?

The first major step came on June 23, 1972 when Title IX was passed. Before this civil rights act was passed, there were fewer than 300,000 girls in the country playing high school sports. Title IX prohibited any form of discrimination against women in athletics, stating “except for provided elsewhere in this part, no person shall, on the basis of sex, be excluded from participation in, be denied the benefits of, or be subjected to discrimination under any academic, extracurricular, research, occupational training, or other education program or activity operated by a recipient which receives … Federal financial assistance”.

In simpler terms, Title IX gave women athletes the right to participate in sports for educational institutions that were funded by the federal government. This opened the door for female athletes. Since the passing of Title IX, the participation in girls’ high school athletics has grown by 1,057%. This is a huge step in the right direction.

Even with all of this progress, Alta Girls’ Basketball Coach Izzy Gustafson said there is room for improvement.  On a local level, there have been major discrepancies between the facilities for girls and boys at Alta in the past, but building renovations now in progress are bringing those discrepancies up to date. Past inequalities include disparity in the team rooms, visiting locker rooms, and the softball field.

The boys teams have had two team rooms with bathrooms connected or close by. The girls have only had one. There are also locker rooms supplied to visiting boys teams, but not for opposing girls teams. According to Gustafson, visiting teams have been based in a classroom. The softball field is another area of imbalance. The baseball field has a press box with a speaker and batting cages. The softball field does not have either of these things. The softball team has to roll out their own speaker before games. They also do not use the batting cages on the baseball field. Often times, they use a net with a ball set on a batting tee. Sometimes they will use the batting cages in the field house.

Fortunatelly, the remodel now in progress is bringing Alta to Title IX standards. Principal Brian McGill said the renovation of the locker rooms will include a visiting team room for girls’ sports and both the baseball and softball fields will include comparable upgrades. “Alta High School is working hard to comply with Title IX standards and will continue to work towards equality in all areas of the school,” he said.

On a national level, there have been other major inequalities among women’s athletics and their facilities. In mid March the NCAA basketball tournaments took place. This tournament is more commonly known as March Madness. This year, the men’s tournament was held in Indianapolis, Indiana,  while the women’s tournament was held in San Antonio, Texas. A problem arose when players posted some of the major inequalities. The women’s weight room consisted of a few yoga mats and one rack of weights, while the men’s weight room had many different machines with lots of weight and space. On top of this, the men got a large gift bag that had many different pieces of merchandise and snacks and the women got a much smaller bag. There was also in a discrepancy in the food that they served the men and women.

Sedona Prince became one of the voices to call out the NCAA on these injustices. She posted on TikTok and brought awareness to the issue. The NCAA put out a statement that they couldn’t put in a proper weight room because of a lack of space. Sedona Prince quickly shut that down when she posted a TikTok showing lots of unused space in the same room. This caught the attention of Steph Curry on Twitter who tweeted about the issue as well.

When CNN asked Prince about this she told them that, “I had no idea it would be at this level, I just made a TikTok and I put it on Twitter because I wanted it to get more exposure and as soon as Steph Curry tweeted it, I was like ‘Okay this is going to be pretty big.’ “

Eventually the NCAA was able to correct the issue and get them a new weight room, however, it took until the issue was brought to the attention of the general public. Equality should be the norm. Although there have been many steps forward in women’s equality, there are still major issues that need to be addressed. It is important the female athletes continue to speak up and advocate for equal pay and equal treatment.

Although Title IX opened many doors for female athletes, there is still progress to be made. Women’s sports programs still lack teams, funds, and scholarships. There are several women who have risen up to speak out about the inequalities in the world of athletics. One of the largest proponents for equality is the National Women’s Soccer Team.

On the financial side, the United States National Women’s Soccer Team had been advocating for equal pay for many, many years. They filed a lawsuit against the U.S. Soccer Federation with claims of unequal pay and poor work conditions. A larger percentage of women’s games have been played on artificial turf than the men’s games. The University Hospitals Sports Medicine Institute conducted a study that found that athletes are 58% more likely to be injured playing on artificial turf than real grass. Federal Judge R. Gary Klausner rejected the arguments made by the team and dismissed the case.

The team was extremely disappointed, but not to worry, they will not be giving up any time soon. “We are shocked and disappointed with today’s decision, but we will not give up our hard work for equal pay,” Molly Levinson, a spokesperson for the team, stated.

Megan Rapinoe has been at the front of the team and has been one of the largest advocated for equality. After the court ruling, Rapinoe tweeted out  “We will never stop fighting for EQUALITY.” Since then, she has visited the White House to speak at an Equal Pay Day event. President Biden has taken side with the team and is going to help fight for equality. Biden stated that “[The United States Women’s National Team] is living proof that you can be the very best at what you do,” Mr. Biden said, “and still fight for equal pay.”