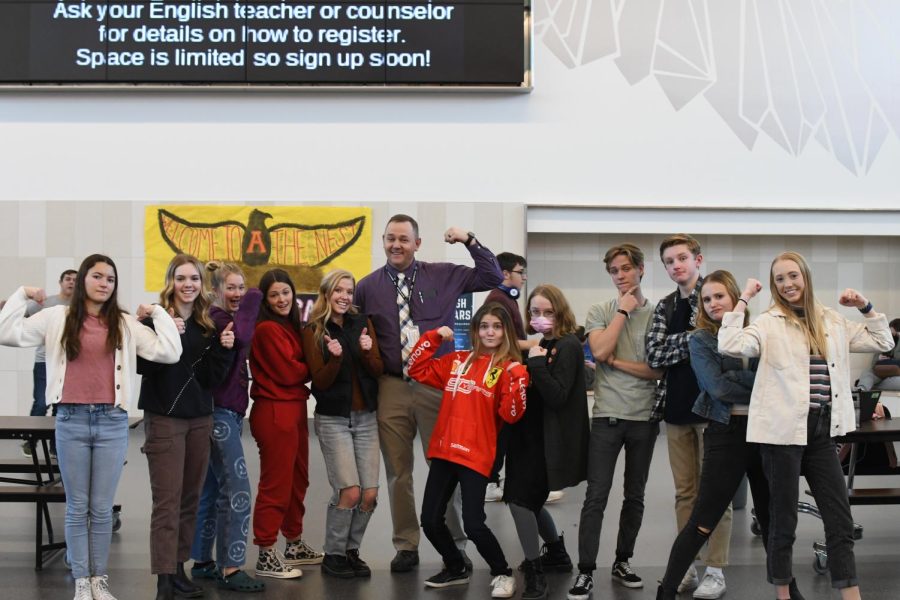 New Principal, Ken Rowley, poses with students during lunch in the commons.

"The most important thing in education is you, the students." - Ken Rowley

Born and raised on an orchard in rural Santaquin, Utah, Ken Rowley is a Utah man through and through. He and his wife Angela have six children who have all moved out of the house to pursue their own paths, with two attending Utah State University. Rowley himself graduated from Payson High School in 1985 and following serving an LDS mission, he headed to BYU-Provo for a Spanish Minor and Social Studies Major. For eleven years, Rowley taught Spanish and History at Juab High School and coached the school’s basketball team for 19 years. Rowley also earned his master’s degree at Western Governors University and received his Administrators endorsement from Southern Utah University.

I can’t say enough good about the people at Alta.”

Toward the end of his 11th year teaching in Juab district, he was offered the Principal position at Juab Middle School. Surprised and honored by the offer, Rowley rolled up his sleeves and got ready for the challenge. From there, he went on to work for Canyons School District as Corner Canyon’s assistant principal. Rowley came to Canyons for the “challenge of working in a big district.”

After about a month of working at Alta Principal Rowley says that along with getting to know his new job and the people at Alta, “the challenging part right now is that everything is so polarized. My perspective is that if we come together and celebrate differences and the diversity that we have, we will be so much stronger.” He adds that “our society is trying to pull everybody apart and separate us rather than unify us.”

“I think that diversity can unify us, but right now it’s tearing us apart.” When we let that separation seep into our schools “we lose our focus on what’s most important in education, the students.” Rowley says.

As an educator and administrator, Rowley hopes to “help [students] become prepared for the future that awaits [them].” Rowley explains that “teenagers are teenagers. Their hopes are dreams are similar wherever they are. I’d hope students will have the same, if not more, opportunities than I did.”

Rowley tries to get teenagers out of their boxes to be more creative. He wants students to think about things from different perspectives.

“As a Principal, I’ve loved every second of working with both teachers and teenagers.”

Succeeding beloved principal McGill, are big shoes to fill. He’s amazed by the dedication, hard work, and sacrifice that goes into everything Alta does. Rowley and the former Alta principal have established a close relationship in the past few months. McGill advised Rowley to make himself available to the students, be sure to meet their needs, and support them in any way that he can.

“Every day I walk in awe of everything Brian McGill has done,” Rowley said.

In his spare time, Rowley helps out on the family fruit farm in Payson. He listens to 80’s rock music mingled with some country tunes here and there. He’s a self proclaimed “basketball junkie” who listens to sports radio. His new favorite colors are Black, Silver, and Red!