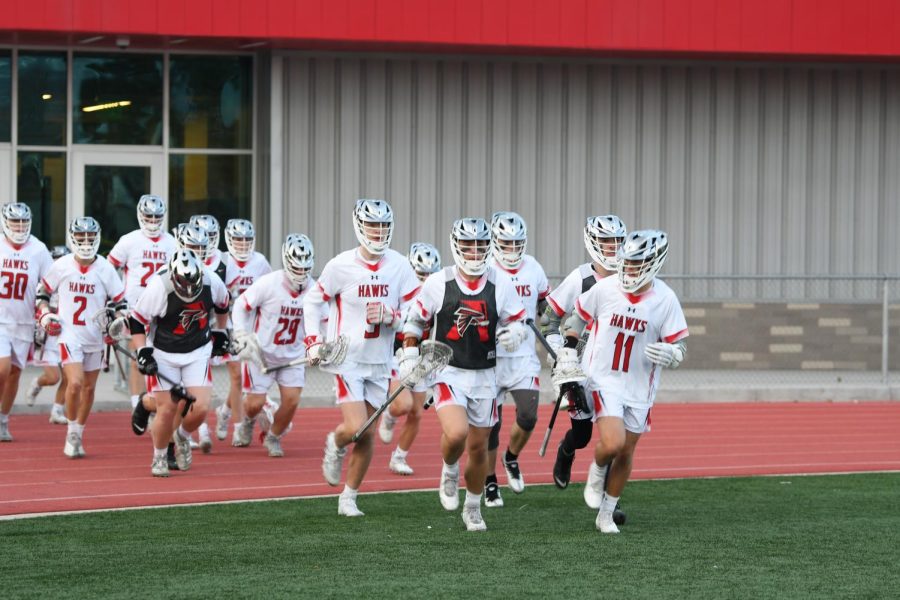 Alta’s Boys Varsity team runs out to the field before their game against Cheroke Hill.

The Alta High Varsity Lacrosse team started this season off on the right foot. Beating the Brighton Bengals 10-4 for their season opener. The next week the Hawks took down the Mountain View Bruins with a whopping 30-0 on the scoreboard. If you aren’t familiar with the scoring of a lacrosse game it’s important to note that a high scoring high school game is around 15 points, so this was an impressive showing from the Hawks.

Last year Alta won their state championship in lacrosse, so they hope to go far this season.  The ultimate goal for them is becoming back to back state champs. The teams confidence is apparent in its motto, “Be the One.”

Alta’s lacrosse coach, Coach Horoba, is glad to be coaching the boys. He stated, “So far it’s the kids and their willingness to work hard. We have a great group of boys that as coaches we get to enjoy spending time with.”

In order to succeed in anything it is important to put in the time and effort. The Lacrosse team works hard putting in the practice hours. The team practices an hour of 6-8 hours a week, in addition to two or three games a week. Putting in the work Monday through Friday, and sometimes Saturday.

The team is hopeful that their hard work will pay off. Things are looking good for the team now as they make their way through the season. Their overall standings so far are 5-2. They are undefeated in region play and only fell short to teams in preseason.

They are 4-0 so far in region play. The Hawks are currently seated first in 5A Region 8. Their most recent victory of the season over Lehi with a great game of 19-2.

The Hawks have one more game this week on Thursday at Orem against the Tigers at 7:00. Make sure to get out to a game this season and watch the reigning state champs in action! Schedules and game times are available on Maxpreps.com.