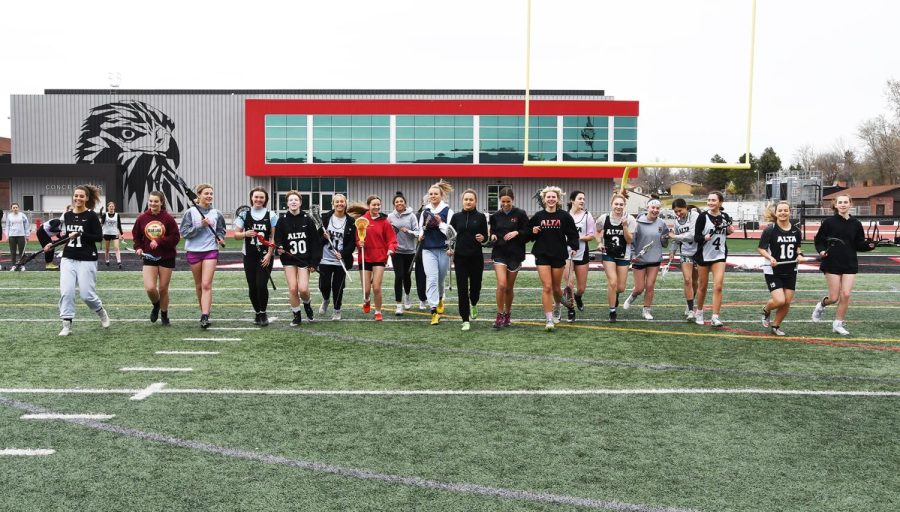 This year’s varsity lacrosse team spends hours in practices so they can achieve success on the field. The team is on a roll and doing well against region eight opponents. The team is currently in second place behind Jordan in region play.

Impressive wins send the team into the second half of the season on a high note.

With an overall 5-2 record, the Alta girl’s lacrosse team has taken control of their season. They started off on the wrong foot, losing to Lone Peak High school, but that didn’t stop them from bouncing back and winning the next two games. They have put up impressive scores for many of their games, including beating Mountain View 23-1. In the team’s most recent game on April 12, they shut out East High, beating them 20-0.

So far, their region record is 4-1, and they are 2nd place in the region behind Jordan High. They have another regional matchup coming up soon, against Timpanogos.

They’re around halfway through the season, and they are not showing any signs of slowing down. They are going to keep their foot on the gas, and finish out their season strong.

According to senior player Autumn Engstrom, the team has finally caught its stride. “We are working together,” she said. “I hope we can always leave our best play out on the field at each game.”

The team’s secret to success is practice. “We condition and put in the work off the field and at practice,” Engstrom said. “It shows during game time.

I love coaching the girls and seeing how much they progress in lacrosse, school, and their lives.”

Coach, Abigail Breur, is pleased with the progress the players have made since the season began. “I love coaching the girls,” she said. “I love being part of Alta Lacrosse and seeing how much they progress in lacrosse, school, and their lives.”

Breur believes the team will finish out this season strong as they focus on becoming better each and every day.

From the way things are going now, Coach Breur expects this season to be one of the program’s best. “There’s a lot of talent on this team,” she said, “and they all work great together.”

“The girls have formed a great sense of teamwork, and are prepared to help each other make this season their best one yet.”

Their next game is Friday, April 14 at 7:30 against Timpanogos at home.