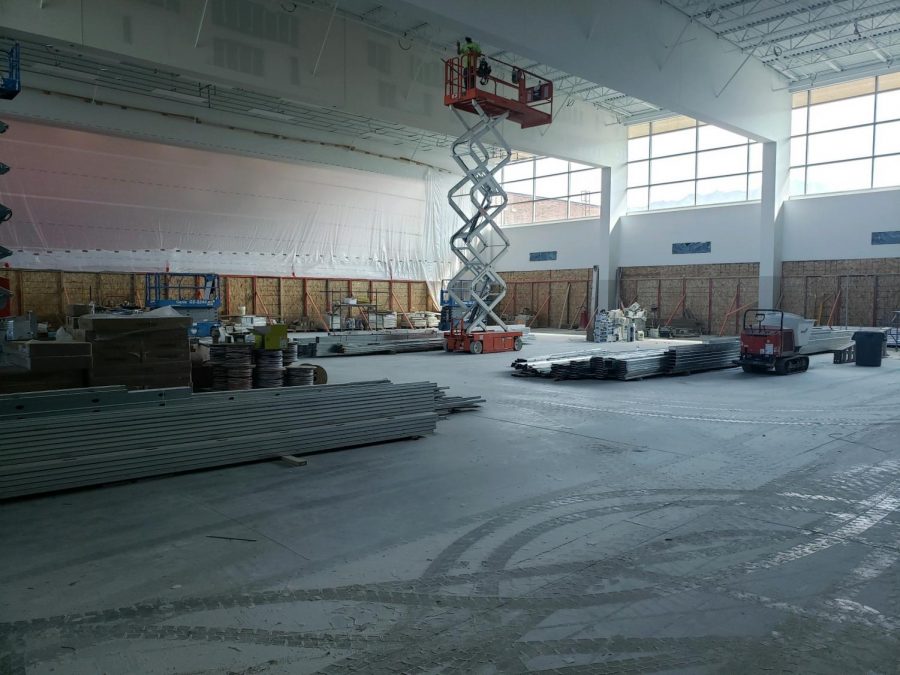 Construction crews put the finishing touches on the ceiling in the newly remodeled commons.

The New Commons will be ready for Student Use in October

Things are looking up now and construction at Alta moving forward. There’s much to look forward to in the months to come. Students will be able to enjoy the new commons area which offers sunlight and a great view of the mountains in four to six weeks from now.

The $50-60 million project is taking shape right before our eyes. Despite the substantial cost and time, it is well worth the wait according to Mr.True. He said that Alta is structurally sound and this remodel will update and bring it to 21st century standards.

The school shutdown in March allowed workers to get a jump on that portion of the project. The roof came off in April and the new roof went on. Windows were installed by August and now construction workers are putting the finishing touches on the ceiling and walls. “I love the windows and being about to see the mountains,” Mr. True added enthusiastically.

One thing is certain, Mr. True is passionate about Alta’s remodel. He loves working with the construction crews and following the project on a daily basis. “This is a team effort among architects, contractors, and district and school personnel with one goal in mind … to build a building that is beautiful and efficient for the students and staff,” Mr. True said.

In addition to the commons, other projects are in various stages of development. Some projects have been slightly delayed, but all are moving forward now. Covid has impacted some aspects of construction. Some building materials have been difficult to acquire. For example, it took nearly two months to receive some necessary supplies and the construction of the south side of the building was slightly delayed because of a required medical leave of one troop of workers over the summer.

In the months to come students will no longer put up posters in the hallways. Instead, the school will be using video loops on new large video screens that consists of 12 monitors on the north and south side of the commons in order to promote school functions. There will be several new rooms including all new choir, band, and practice rooms as well as a new office and counseling center. Those are scheduled to be finished within the year.