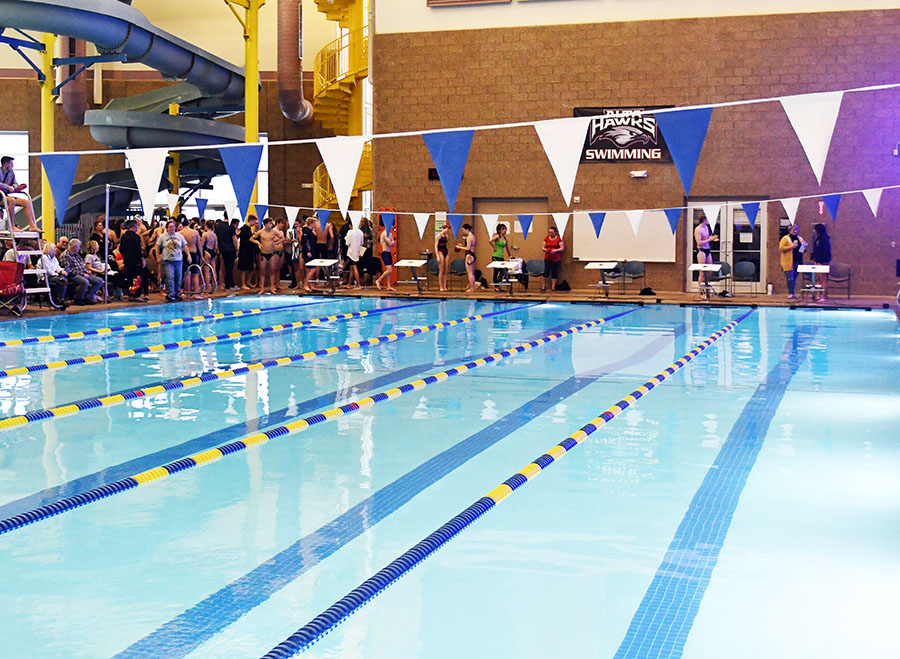 It’s business as usual for this year’s swim team. They will work with covid-19 protocols and the Dimple Dell Pool and begin workouts once the team is set.

Covid-19 Protocols Cut the Swim Team by Half

Covid-19 protocols at the Dimple Dell Pool will impact the number of swimmers on Alta's team this year.

New “maximum swimmers per lane” Covid-19 protocols at the Dimple Dell pool have caused the swim team to go on a major diet. The team has been forced to trim the team by as much as 50 percent.

In previous years, the Alta Swim Team has managed over 100 swimmers, but now that has to change. Dimple Dell Recreation Center, the recreation center Alta’s swim team practices at, has limited the amount of people they can allow per lane. This will cause Alta to cut swimmers from the team, reducing the team by more than half. This year is going to be difficult for the Alta Swim Team but they’re “moving ahead like normal,” according to the coaches.

Tryouts for the Alta Swim Team have always been a “no cut” type of tryout, meaning that if you try out for the team, you have a guaranteed spot. However, this year due to social distancing regulations, the amount of swimmers allowed per lane will affect the amount of swimmers on the team. “We’re only allowed 4 people per lane, so we have six lanes which gives us 24 people per practice session. So we will have two practice sessions… but that leaves us with 48 people,” explained Kristi Kimble. She then added that there still remains a possibility of allowing 72 people on the team depending on whether or not a third session can be added to their schedule.

Finding a practice location for the Alta Swim Team to swim at has been a struggle. Coach Kristi Kimble explained that the options were either Dimple Dell and a limited team, or swimming at Pepperwood or another privately owned pool with chances of a larger team. However, Dimple Dell became the best option considering it is the pool closest to Alta and it has been approved for use by the Canyons School District. When asked about when the swim team will begin swimming again (rather than on-land workouts known to swimmers as dryland) Coach Kimble responded, “For our morning swim we should be back [to swimming] on Tuesday (September 8), but for the rest my guess is not until October 1st… We’ll start with tryouts and then lead into regular practicing.”

Currently, “dryland” workouts have been the swim alternative since the swim team can’t swim in a pool yet. Maggie McDonough describes the dryland at morning swim as different and difficult. After every dryland practice with morning swim, the class always ends up sore, but Maggie also says that “it is a good way to cross train, but I definitely prefer swimming.”

One question remains with the Alta Swim Team: what happens if Covid-19 gets worse and they lose access to their practices at Dimple Dell? Well according to Coach Kimble, “That’s when we have to start farming out and finding a pool… My guess is that if Covid got worse, the swim season would be in jeopardy. Then we would have to cut a lot of the team down and say ‘hey we got to focus on these core groups and the rest can do dryland.’” No matter what, the Alta Swim Coaches promise that this swim season will work out and that the swimmers will still have the chance to swim.

“I really don’t know what to expect with everything going on right now,” McDonough said. “I’m just glad to be swimming at all.”

The swim team plans to swim this year through all of the struggles with Covid-19. They remain strong-minded and excited to swim. Despite setbacks and other future ones, the swim team is prepared to make it through as they start a new swim season.