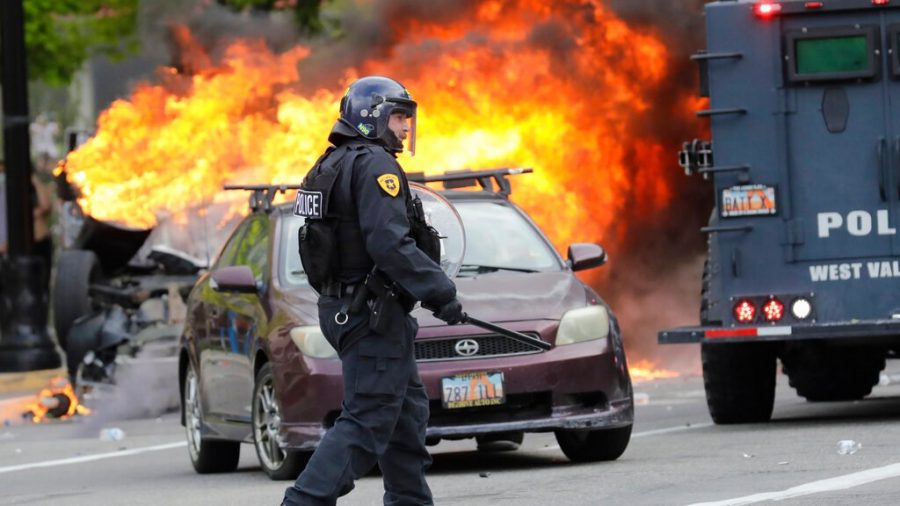 A policeman walks in front of a burning vehicle as protesters demonstrate Saturday, May 30, 2020, in Salt Lake City.

Defunding Police Everywhere is not the Answer

In our nation today there is turmoil at every corner, it seems. One of, if not the largest cause of turmoil involves attacks on police departments nation wide. Is the turmoil their fault or are we blind to the truth? Through the course of this year, it seems our country has fallen apart. We see people rioting against the police, something that nobody saw coming. The sad truth is that the police’s authority is being attacked and dwindling. The death of George Floyd opened the floodgates to massive amounts of riots, many turning violent.

The first amendment of the United States constitution states that people have the freedom of speech and the right to “peaceably to assemble, and to petition the government for a redress of grievances.” The word that sticks out to me the most is “Peaceful.” It states that people may peacefully protest, but to riot and to intentionally harm others and destroy federal and private property in another matter entirely. This course of action only brings out the worst in people and falls outside the line of “peaceful” protest, in my opinion.

Police were the first ones attacked and are continuing to be attacked. They are the ones that hold the riots in line. The big reason that people are getting hurt, that main idea that members of the media tend to leave out, is that they (police) are striking first and a lot of the time harder. Policemen are doing their best to hold the crowd down and with minimal casualties. They deal with so much absolute crap from angry mobs and many officers are hospitalized because they are keeping people safe. It is only when the rioters are out of control that police fire the rubber bullets into the crowd. The rubber bullets are enough to immobilize someone without causing permanent damage. But people view their actions as forms of police brutality. When people are killed by police,  the victims were either armed or highly dangerous and about to harm someone else.

It is plain to see that destructive behavior only leads to more destructive behavior, and is highly prevalent in riots across the country. In the case that policemen aren’t good people then there are ways to remove them from their position. And an idea that could stop the situation all together is that instead of defunding police, the officers should pay for their own insurance. This would leave them responsible for the damage they do and prevent deaths.

These events remind me of a trolley scenario. Put yourself in the shoes of the driver and you see that there are four workers on the track ahead of you and the brakes are out. You also notice that there is a separate track you can turn onto and it only has one worker on the track. It then becomes a decision of does one life make up for saving four. This is very similar to a cop’s experience with an armed threat. The majority of the time the threat is trying or has hurt other people. And it then becomes the officers decision. Does he / she stay on the main track and kill this man, and save four innocent lives.  Or does the officer change tracks and risk the threat killing four innocent people.

It isn’t an easy decision to make. That is why police officers do the best that they can to keep us safe. And for thousands of people to think that someone is bad because they were doing their job is completely backwards. They say that there is a spike in police shootings, which is only because there is a rise in attacks on police officers. At that point the officer is also trying to protect his own life. It is flat out wrong to revolt against the police force who daily put themselves in harm’s way to protect us.

It is sad that in many places across the country, entire police departments have been closed down and crime has risen substantially because there is no police force to stop it. There might not be a police force in the whole country if this violence continues and total anarchy will result. Do we want that? A large problem is the media which misleads the public and has been fanning the flames to make the crisis as large as possible. So the question is has the media misinformed the public? It’s something to think about. I don’t know the solution to this problem, but defunding those who protect us is definitely not the answer. We need our police forces to keep law and order and protect the citizens of our country.