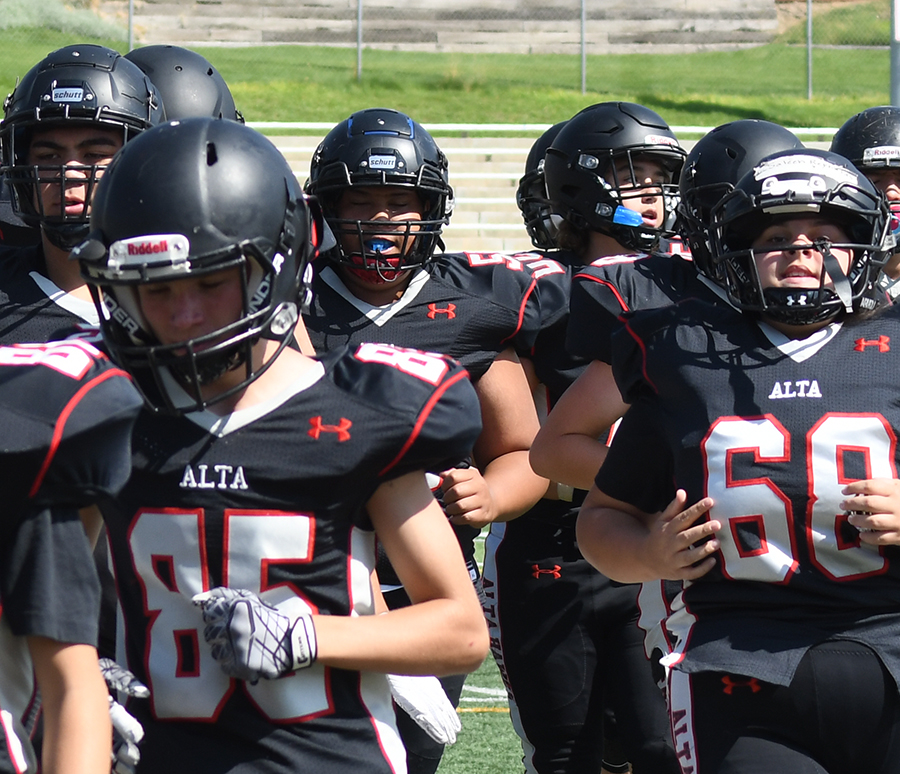 Saleen Reynolds, number 68, (far right) runs onto the field with her teammates on the Freshmen – Sophomore Alta football team.

Guard Saleen Reynolds likes the physicality of football and has "a ton of fun" playing the sport.

Saleen Reynolds is both. She is a Freshman playing right guard on Alta’s Freshman-Sophomore team, and of course, she is a girl. “I’ve been playing football for four years and I’ve really enjoyed it. I’m a right guard, and sometimes other O line positions too. I like it because of the physicality of it. It’s nice to be able to hit people,” she said with a laugh.

But how does a girl get started playing football when the system never even considers the idea that a girl would even want to play?

Reynolds said she has always loved the sport, but there weren’t any girls leagues when she wanted to play, so she joined a team with her friend. “I had a ton of fun that first year even though I think we might’ve lost every game,” she said.  “It was fun enough that I decided to keep playing.”

It’s definitely interesting being the only girl on the football team. “I’m grateful that the other players and the coaches are really supportive and they make it an inclusive environment,” she explained when asked about the environment.

What do the players and coaches have to say? William Johnson said, “Honestly it’s been pretty great, she’s always willing to work and puts full effort into everything and she never stops cheering for her team. She has awesome team spirit.”

Wayne Tuinei, her position coach, said, “She’s a great kid, works hard, and she has great technique. She is as good or better than some of the boys. I’m really proud to have been her coach.”

Coach Te’o said Saleen has been awesome and having a girl on the team hasn’t been very different at all. “She’s one of the guys and she’s a pretty good player too,” he said.

But of course, like all things, there are things that can definitely be improved upon. “It’s not perfect. Guys have their own place to put their stuff in the locker room but I can’t put my stuff there which makes things a lot harder because I have to put things in Coach Te’o’s office,” Reynolds said.  “Not everyone is super in favor of girls playing football, they can kinda see it as taboo. It would make everything a lot easier if girls playing football was more normalized.”

On the future of girls in football, Coach Te’o said he can see a trend of more and more girls wanting to play. “There’s women’s leagues and clubs out there and the next step to that is high school teams,” he said.