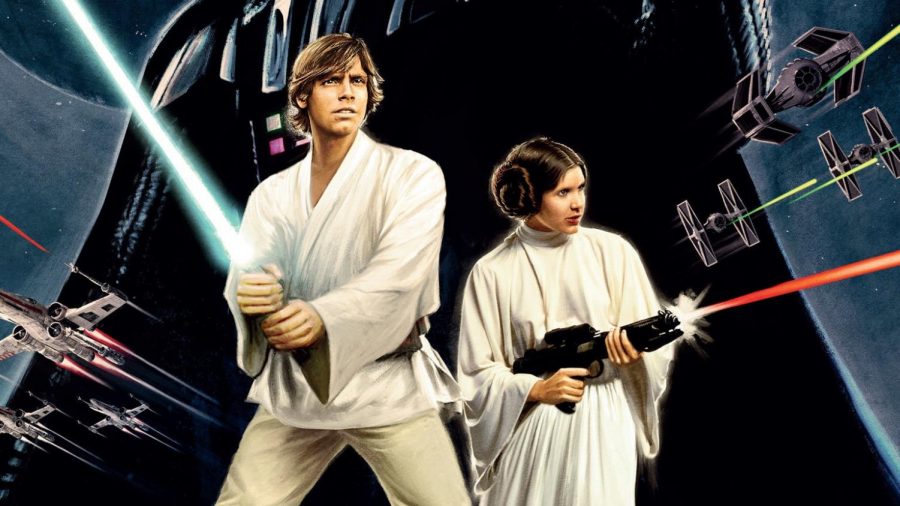 The Story of Star Wars for Dummies

Here's a recap of all the Star Wars movies for those who can't keep it all straight.

A long long time ago in 1977, in a galaxy far far away, it all began. The Star Wars saga, created by George Lucas and produced by Lucasfilms, hit the big screen.  Since then, new Star Wars installments pop up every few years to the delight of Star Wars groupies everywhere. The sheer volume of these movies and keeping everything straight can make the average person’s head swim, so here’s a basic run down for the Star Wars neophites everywhere who want to fit in when Star Wars discussions pop up over dinner.

The first episode in the star wars timeline was released in 1999 and introduces Anikin Skywalker as a child and includes Obi-wan Kenobi as a padawan training under Master Qui Gon Gin. We are introduced to Princess Amidala who later becomes Senator Amidala and Jar Jar Binks who later becomes representative of Naboo. They all must team up against an illegal invasion by the trade federation. To make matters worse the Jedi order is made aware of the presence of the Sith with the appearance of Darth Maul.

Attack of the Clones

The second episode of the trilogy released in 2002, takes place ten years after The Phantom Menace and follows Anikin Skywalker and Obi-wan Kenobi searching for the truth behind the Separatists plot to kill Senator Amidala. They find that the brain behind the attempt on the Senator’s life was from an old friend now called Count Dooku. To conclude the movie Anakin and Senator Amidala secretly get married.

Revenge of the Sith

The third and final movie of the prequels takes place in the last year of the clone wars, three years after the attack of the clones. At the beginning of the movie, Obi-Wan and Anakin are sent to rescue the chancellor from the separatists and kill their political leader Count Dooku, and Anakin becomes more conflicted with visions of the future he questions the ways of the Jedi. With the death of General Grievous, the separatists could not survive. Anakin in his frustration joins the Dark Side and becomes Darth Vader, leading to the fall of the Jedi and the rise of the Empire.

This movie takes place 19 years after Revenge of the Sith. In a time of conflict, a group of unlikely heroes bands together on a mission to steal the plans to the Death Star, the Empire’s ultimate weapon of destruction. The Death Star had only recently been completed and was about to amass its great destruction on the galaxy. When the rebels learned of this device they needed to learn how to destroy it. They used Jin Erso, daughter of the death star designer, to go and get the plans from the empire. While all the heroes died, they successfully stole the plans and sent them off on the Tantive 4 which leads directly into A New Hope.

A New Hope takes place immediately after Rogue One and is the first episode of the original trilogy. It focuses on Luke Skywalker who is the son of Anikin and Padme. Luke meets new friends such as Han Solo and Chewbacca as well as Obi-wan who teaches him the way of the Jedi to stop Darth Vader. He lives on Tattoine, a desert planet, with his uncle and aunt. He dreams of adventure and takes his first chance to see it when he meets Obi-Wan. They sneak aboard the Death Star to free a rebel leader Princess Leia. Once they had the plans with the rebels on Yavin 4, they used them to destroy the death star.

The Empire Strikes Back

The Empire Strikes Back takes place three years after A New Hope and focuses on the story of Luke and Han fighting the empire. Luke is told by a ghost of Obi-Wan that to become a Jedi he must go to Dagobah and learn from Yoda. Luke has a vision of the future and sees that his friends are in trouble. The empire had set a trap for Luke which used Han, Leia, and Chewbacca as live bait. Han Solo is frozen in carbonate to be sent to Jabba the Hutt as a prisoner. In the trap by the empire, Vader and Luke have a duel that ends with Luke losing his hand and falling down a chute. He gets a robotic hand and awaits his future.

Return of the Jedi

The last movie of the original trilogy takes place less than a year after A New Hope and shows Luke Leia and Han all reunite with a break out from the vile Gangster Jabba the Hutt. Knowing that the Empire had built a second death star, the rebels had to act fast if they were to destroy the empire once and for all. They knew that the emperor was overseeing the completion of the Death Star and they saw this as an opportunity. Luke and Vader have one last duel which ended with Darth Vader losing his arm. The emperor almost kills Luke when Anakin Skywalker reemerges from the dark side and throws the empire down a shaft. And the empire was no more.

Set thirty years after Return of the Jedi, The Force Awakens follows Rey, Finn, Poe Dameron, and Han Solo’s search for Luke Skywalker. They face a new foe that arose from the ashes of the Empire. They call themselves the first order. Led by the son of Leia and Han Solo, Ben or as he calls himself Kylo Ren. The first order has their version of a death star, called star killer base which they use to destroy entire solar systems! The Resistance, the new version of the rebel alliance, must act fast to save many innocent lives from being lost. And they do find Luke Skywalker in the hopes that he can end the first order single-handedly.

This movie picks up right after The Force Awakens, and Luke’s solitary existence gets upended when he encounters Rey. Her desire to learn the ways of the Jedi forces Luke to make a decision that changes their lives forever. Meanwhile, Kylo Ren and General Hux lead the First Order to chase down the Resistance and annihilate them almost entirely. To allow their escape Luke lays down his life. However, the fighting spirit lives on, which builds to the final movie in the saga.

The Rise of Skywalker

Set a year after The Last Jedi, we find the resistance struggling to survive. And a disturbing message from none other than the Emperor himself scourges the galaxy. Rey must find the sith planet of Exigol and destroy the Emperor to save the galaxy. Kylo Ren feels contempt inside himself because he realizes the dark side isn’t right, and he helps Rey eventually destroy the Emperor and the Final Order that he was building bringing peace to the galaxy.