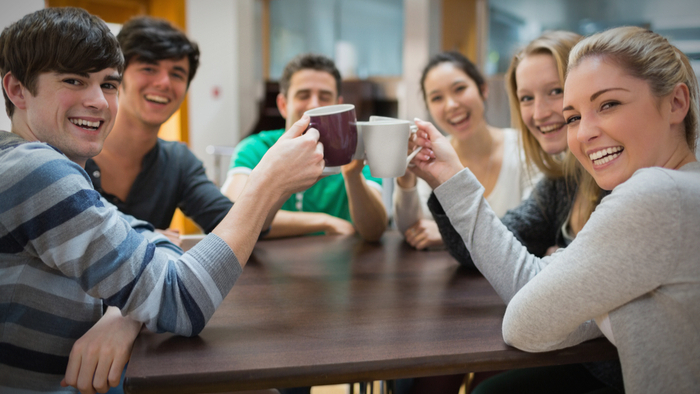 What is Peer Pressure and How Does it Affect Students?

If you surround yourself with good people, you will generally make better decisions and vice versa. There are two major types of peer pressure, positive peer pressure and negative peer pressure. Counselor Ms. Astle said, “Peer pressure has an immeasurable amount of impact on students because when someone is in their teen years and developing as a person, they often try to replicate what they see and they will look towards other people for answers instead of themselves. Peer pressure gives people the feeling of acceptance among their peers.”

It is very common for young people to look towards other people who are in the same situation. Unfortunately this is not a very healthy action as most people make bad decisions, but because young people don’t know any better, they will decide to join on. There are however, cases in which being influenced by your peers could be very beneficial to the well being of students.

Negative peer pressure causes more damage than positive peer pressure positive effects. An example of negative peer pressure is when a friend convinces you to start drinking alcohol. If a student starts drinking alcohol at a young age, it could stunt growth of the brain. According National Center for Biotechnology Information, they say, “Studies reveal that youth who started drinking before age 15, compared to those who waited until they were 21, were 12 times more likely to be unintentionally injured while under the influence of alcohol, 7 times more likely to be in a motor vehicle crash after drinking, and 10 times more likely to have been in a physical fight after drinking.” Most of these negative effects are highly addictive and are spread through friend groups.

This is why it is important to surround yourself with good people. If you spend your time with negative people, you start to inherit the negative effects of those people.

Peer pressure does affect some people very differently. It can be a major part of a kids life, or many people may not even experience peer pressure in a major way.

Freshman Rock Elder said, “It has a very large impact on my decisions. Most of the time, I look at other peoples actions and I will learn from what they do. If it is good, I will try to replicate it, and if it is bad, I will try to avoid it.”

Junior Greta Gorbenko says, “Once I got off of social media, I have not needed to look at other people, but I have been able to make my own decisions and not worry about what other people think of me.”

First you need to make positive decisions based off of yourself and not the other people around you.”

As technology advances, we have started to see a new type of peer pressure, social media peer pressure. As teens get access to social media, they start to see people encouraging them to something. They also can see people who are happy on social media and they will try and replicate what they see on social media to try and achieve the same sense of happiness. This new peer pressure is considered to be more severe than the others because it has more influence on younger people and they do generally promote unhealthy behavior.

In a SecureTeen article called, “Peer Pressure and Teens: Social Media is the Culprit” it says, “Going through the Facebook Timeline of friends and seeing them going to late night parties, drinking alcohol, trying drugs, having a physical relationship, etc., make teens feel that everyone except them are enjoying their life. The fear of missing out is so strong that they unintentionally start getting attracted towards these activities.”

Younger people often experience the fear of missing out. If they see that someone is doing something, they fear that they will become obsolete and everyone will join their side and leave them. This causes students to participate in actions and stay involved with their peers. There is positive peer pressure on social media that can spread social causes that were previously unknown. Many charities will run off of social media and will peer pressure people into donating for their cause. If your friends are telling you to donate, you fear that if you don’t engage with the cause, your friends will not accept you. This is different however because lots of people donate without peer pressure while the negatives would die without peer pressure.

Peer pressure has impacted all of us very differently, however the effects are widespread. The best solution to peer pressure is to make decisions based on your health. Astle said, This allows you to make decisions for your health and well being. Next you need to have the courage to stand against negative actions. This prevents more people to be influenced by the negative actions and can help people already engaging in those actions. Be true to yourself and not other people.”