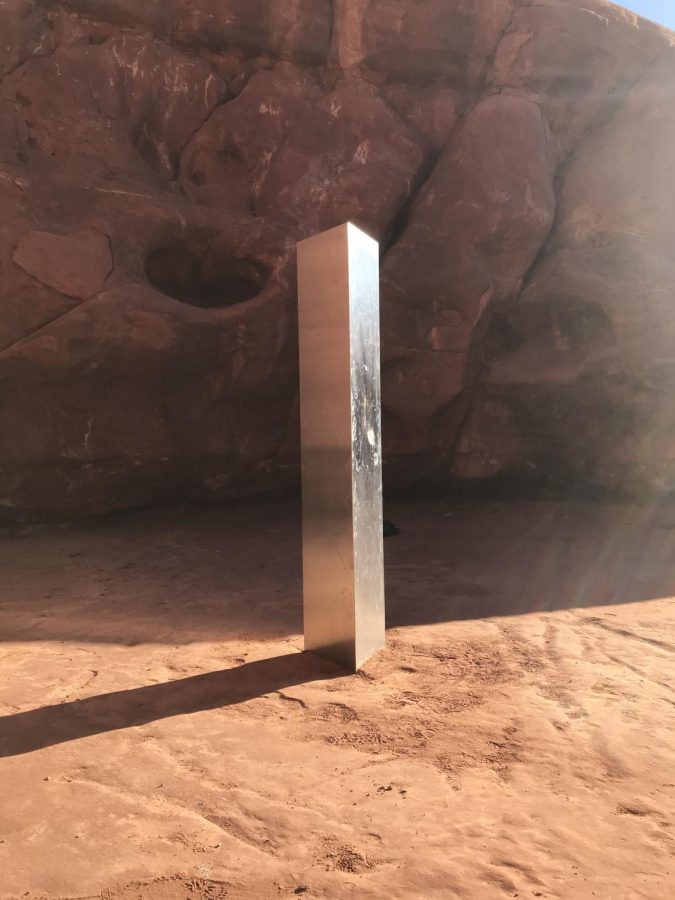 Utah monolith in the southern Utah desert before it went missing

The Long and Crazy Story of the Utah Monolith

One fateful Tuesday night, I mentioned the new Utah mystery to my dad. The Utah monolith. A 12 foot stainless steel triangular monstrosity found outside of Canyonlands national park, nestled in between red rock in a slot canyons 13 miles from the nearest ‘road’.

My father is a true outdoors man, and he loves off-roading and finding the most remote places that Utah has to offer. He loved the concept and the fact that it was blowing up all over the country. After a quick google search, I managed to find the coordinates, and that’s when it began. My fathers obsession with the monolith. He immediately pulled out his maps, got on his laptop and plotted how we would get there, that night. My dad, sister and I, left the house at 7 pm that very night and drove for 5 hours into southern Utah to find the monolith.

The Utah monolith has captivated fans since it came to light on November 18th by a helicopter crew counting bighorn sheep. On Nov 20th, the Department of Public Safety, (DPS), posted photos of the encounter on their Instagram. Since that week, over a 150 monolith imitations have come up all over the world.

The exact date that the monolith was erected is unknown, but thanks to an open-source intelligence journalist, we know that it had to have been assembled sometime between July 7, 2016 and October 21, 2016. It stood tall for 4 years before finally being discovered.

Unfortunately though, the monolith was in fact illegal. On Nov 27th, a Moab based recreationalist group consisting of Andy Lewis, Sylvan Christensen, Homer Manson, and an anonymous companion drove into the slot canyon it rested in and dismantled it, leaving only a triangular piece of metal (presumably the top) and the cuts in the ground used to put it in 4 years prior. The group removed it because of the conservational motto ‘Leave No Trace’. With the monoliths popularity came large groups of people (myself included) setting out to find it. And with large groups of people comes destruction. The walls of the slot canyon had scrapes carved into them from children, people brought dogs, and very few remembered to carry out trash. Not to mention that the ‘road’ to the monolith is not for the faint of heart. The road is 13 miles of basically off-roading. Going over washes, small ditches, and slippery red rock can’t be accomplished in every car. For the safety of enthusiasts and the conservation of the land, it’s best that the monolith was removed.

As for my trip, it was amazing. We drove through the night, stopping to sleep in a Best Western on Nov 24th. The 25th, we woke up and finished out the 5 hour drive into what used to be Bears Ears monument. The road was insanely bumpy, but we finally made it to the monolith. Upon getting out of the car, we heard a helicopter flying incredibly low, and we watched it rise out of the slot canyon that the monolith was settled in. It turned out that the helicopter was that of the Diesel Brothers. 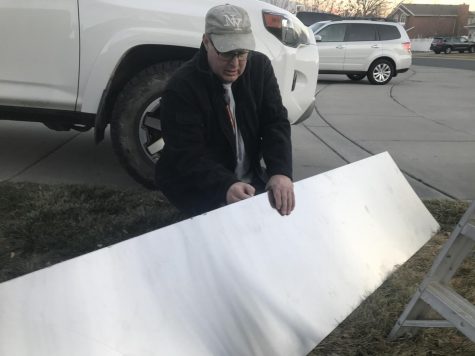 Once we had heard that the monolith had been removed, I could tell that my father was heart broken. Well, I come home from school a week or so later, and see my dad pulling plastic off of something large, triangular, and metal. Yes, my dad built his own monolith for our front yard, just in time for Christmas too. We put Christmas lights on it, and made chocolate bar monoliths to give to all of our neighbors. My father was officially obsessed with the Utah monolith.

Now that it’s gone, we still love the monolith, even though it only lives within our hearts, and front yards.