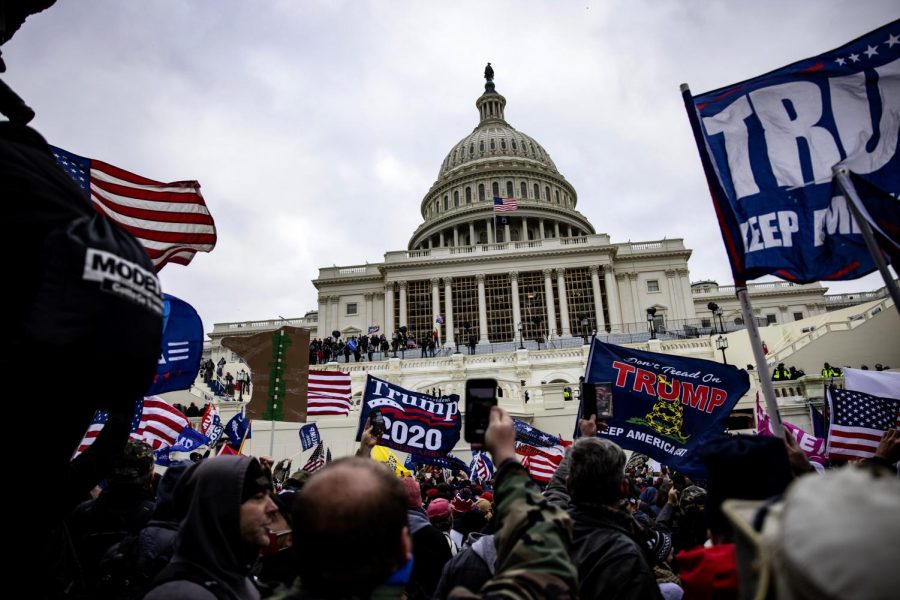 The January 6th Capitol riots have spurred dialogue on where to go from here.

Students Square off about the Capitol Riots: Two Views

Gracee Day(D) and Wesley Hardy(R) react to the riots at the capitol.

The storming of the white house by right-wing radicals during the senate count of electoral votes on Jan 6th has led to questions about civility, the election process, bias in the news, and the future of the republican party.

Wesley Hardy: The Capital Invaders claimed that they planned to ensure that the concerts over election fraud were addressed. They chose one of the most ineffective and bull-headed ways to achieve that goal. Rather than taking the constitutionally protected routes of petitioning through address through the courts, they attempted to bully their elected representatives into doing what they wanted. This backfired catastrophically. Not only did they alienate those in the middle but they also lost some of their strongest supporters.

Gracee Day: The riots and the capitol building on January 6th were a disgrace to American democracy. The right-wing radicals that stormed the capitol building commit and act of domestic terrorism without accomplishing anything but making Trump look back and causing people to call for the 25th amendment to be enacted. In my opinion, these riots were not successful in accomplishing anything other than making people realize that the radical right and trumps die-hard supporters will stop at nothing to get what they want even if it means destroying democracy.

Wesley: While there are some claims that the police would have used more force against the protesters had they been advocating for another cause or if they were predominantly a minority race. I do not believe that is the case. Capitol security was underpowered to deal with the size of the crowd present. After retreating and letting the rioters into the capitol and receiving reinforcements, Security used tactics similar to those used in Portland over the summer. They used tear gas riot gear and arrests to clear the building and enforce the curfew. The belief that police would discriminate against different races and causes shows the same distrust in American institutions that led to the Invaders storming the capital.

Gracee: After looking at the footage of the riots last week and the BLM protests there was a clear line drawn between how police treated people of color vs the majority of white protesters in the capitol. I am a white female; I don’t have experience in being discriminated against because of my skin color, so my voice on this matter only pertains to what I have seen over the past year. In my opinion, the capitol police failed in protecting the capitol. I believe they didn’t expect as much violence because they knew the majority of the rioters would be white so they understaffed. I also believe if it was the BLM movement that stormed the capital the police that was there would have used more force.

How this day will be remembered?

Wesley: The storming of the capital achieved something that not even the confederate armies managed during the Civil War. This was the first time the Confederate flag was flown in the capital ever. This was the worst damage done to the Capital of the United States of America since the burning of the White House by the British during the War of 1812. This day ought to be remembered in infamy. Unfortunately, I am a pessimist and doubt that the general public will think about this all that often except perhaps once a year when their teachers do a lesson on it. We have a large percentage of the population who do not even know the difference between Memorial Day (which commemorates those who died in the line of service) and Veterans Day (which honors all those who served in the armed forces).

Gracee: This day will hopefully be remembered as it was an act of domestic terrorism done by right-wing radicals who have no respect for democracy or their own country. I do not believe most republicans supported this act. I do not believe that the republican party was to blame for this. The only people to blame for this are the rioters and the president who incited them, the president who encouraged this behavior. Donald J Trump should be banned from ever running for reelection again; what he encouraged was disgraceful and distasteful.

Where should the Republican party goes from here.

Wesley: The Republicans threw their weight behind Pres. Trump due to his lack of politics. I think many people were tired of the polite but meaningless prattle that typifies politicians today. He did accomplish some of what conservatives desired; the lowered tax rates stimulated a growing job market, his work in the middle east was crowned by peace accords between Israel and Saudi Arabia, he pulled out of the uneven Paris Climate accord while still having lower emissions and at this last election he got the highest minority to turn out of any Republican presidential candidate in recent history. Unfortunately, this last year has shown his inability to handle crisis and he has dragged the Republican party down like a burning ship drowns rats. This last month has shown it with him frantically trying to hold onto the office of president at all cost. These riots are just the final straw that divided the party from Trump. If the Republican party has any hope of survival, they should distance themselves as far from him as possible. We already see this happening as the calls to use the 25th amendment (which allows the VP and Congress to remove a president if he is not fit for the office) rise.

Gracee: As a registered democrat I hope to see social change from the republican party in the future I would love to see acknowledgment that Donald Trump was not only a bad president but a fascist one. I believe that is how we start change in the republican party by acknowledging they let him get away with too much for too long and it eventually led to this. Once this is acknowledged, I would love to see the two parties working together to prevent something like this from ever happening again.

Gracee: I believe there are good and bad on both sides and while I know my hopes and opinions might seem radically different, I think this is going to be the start of a better brighter future with less contention. I am happy that going into 2021 that the senate and the house will both be blue. I am looking forward to seeing what president-elect Joe Biden does for this country. I think things will get better in the next few months, and I hope we as Americans come together and strive for liberty and equality.

Wesley: I think that if we are to continue as a nation we need to forgive and not hold grudges. The United States used to be the paradigm of an educated Republic where even the poorest man was knowledgeable about the issues of the day. We have lost that and with each side only knowing what they want to believe is true, the friction and violence will continue.