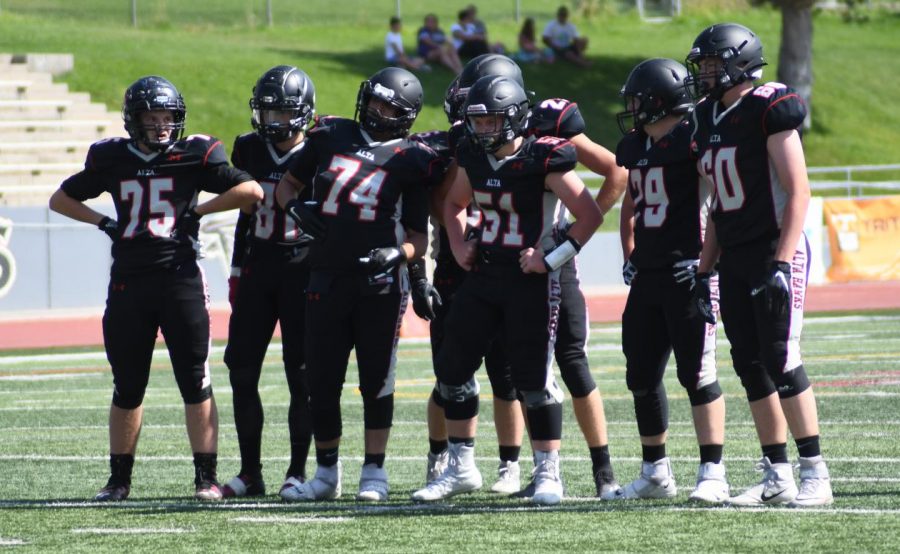 The 2020 JV football team preps for their next play against their opponent August 2020. With many seniors graduating, many from the JV team will step into key roles for the 2021`season this coming fall.

As the indoor football training season draws to a close,  Coach Te’o and the rest of the team have set their sights on ensuring a successful preseason and summer training period.

This year was not a smooth ride for everyone, let alone for Alta’s football team, explained Coach Te’o as he reflected on the difficulties they faced as a team.

“Last season was the Covid season; and that meant it came with a whole lot of surprises. It was a good season and we played well, but it was really, really difficult from week to week because of quarantine and not knowing who we were gonna have, always shuffling the deck,” Te’o said. “Everything was taken  seriously, even if it might’ve just been a cold.”

However, aside from the various challenges that came from quarantines and school lockdowns, Te’o added that the team also “definitely struggled early on from lack of depth, injuries, etc… and it wasn’t until later that it got a lot better.”

Despite the ups and downs of training and a less than stellar start to the season, the team finished out 6-6. The team lost in the quarter finals for state, in what Teo called “a game that we should have won,” a sentiment with which the rest of the team seemed to strongly agree.

“It’s really did leave us with a slightly bad taste in our mouth,” said Te’o, “but it also left us with the desire to work even harder, so I know that the guys we’ll have going into the upcoming season are going to step up and make us proud.”

Ultimately finishing five or six overall after starting from as low as 26, Te’o said, “You know, despite the slow, somewhat painful start, through the end of it we were really able to showcase what we already knew we were capable of doing.”

After finishing out the fall football with an impressive recovery, the team is ready to refocus and train harder than ever before, especially with so many seniors graduating, “We were very senior heavy this year, so we’re going be really sad to see them go this year. We had 9 kids that signed, and while it’s kind of sad, we’re really happy/excited to see them having the opportunity to play at the college level,” explained the coach.

Key players for the upcoming season at Alta include Ethan Jackson, who, according to T’eo, “is going to be the guy for the quarterback position,” and who will be leading the team in conjunction with Micah Kaufusi, “our outside receiver and linebacker.”

When asked about goals and expectations with respect to next year’s performance the coach was upbeat despite the challenges, saying, “We’re in the toughest region in 5A, so it’s going be a tough fight all the way through but I expect us to be number three after it’s all said and done.

“I like where we are at in terms of what we’ve done in the weight room, because the kids have worked really hard.  It’s really going come down to how we manage the month of June and get them out and ready to bring their all to the table.”

Currently, they are planning on finishing out in 3rd, and in order to do so, the team is finishing up off-season training and getting ready for summer conditioning, with a renewed focus and newcomers and line ups this year.

“You can’t ever know exactly how it’s gonna go, but it’ll be exciting to see what happens for the next chapter of Alta football, particularly in an environment less restricted by Covid,” Te’o said.