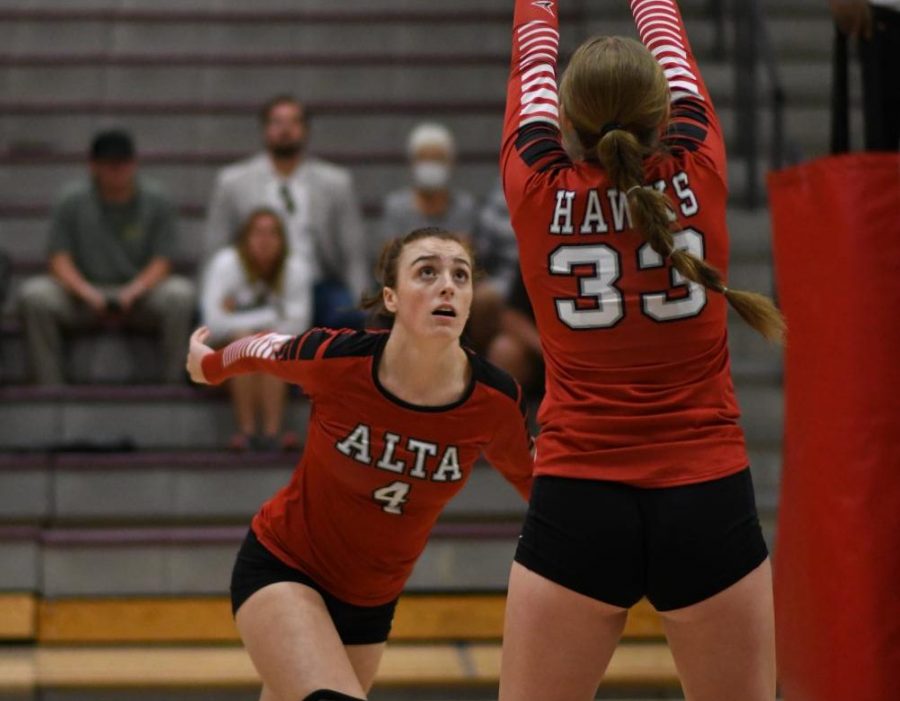 Macy Wood stays focused on sending the ball back to Jordan.

The volleyball team has won five matches and lost seven so far this season.

With the gym under construction the team is struggling to find a practice location; however, they are still practicing hard even through this challenge.

Speaking about the gym construction, Coach Mike Gansauge said, “We can only take care of what we can control.” For the most part, the team practices in the gym at Mt. Jordan Middle School.

In a perfect world, Coach Gansauge would have a gym and place to practice on a consistent basis. This year, the team is considered the “home” team, but they have been forced to play on their opponents’ courts, and that that is definitely not ideal, Gansauge said.

Additionally, the  teams in Alta’s region are good, Gansauge said. Despite that, the team is working hard to play through difficulties.

When asked about what is the biggest challenge this year Willa Grimmer said lack of gym and numerous injuries are a problem.

When the girls were asked about what they think is most important to work on at the moment they state, “To have a positive attitude and not to dread on what goes bad.”

Junior Captain Macy Wood said, “Our goal is to do the best as we can and to make an effort out of it.”

In the end the girls believe that no matter how hard the challenges they face, they should be one as a team and enjoy  the moments that they have together as a team win or lose.

“Remember that at the end of the day what matters is that you are a team, and your in this together,” Grimmer said.