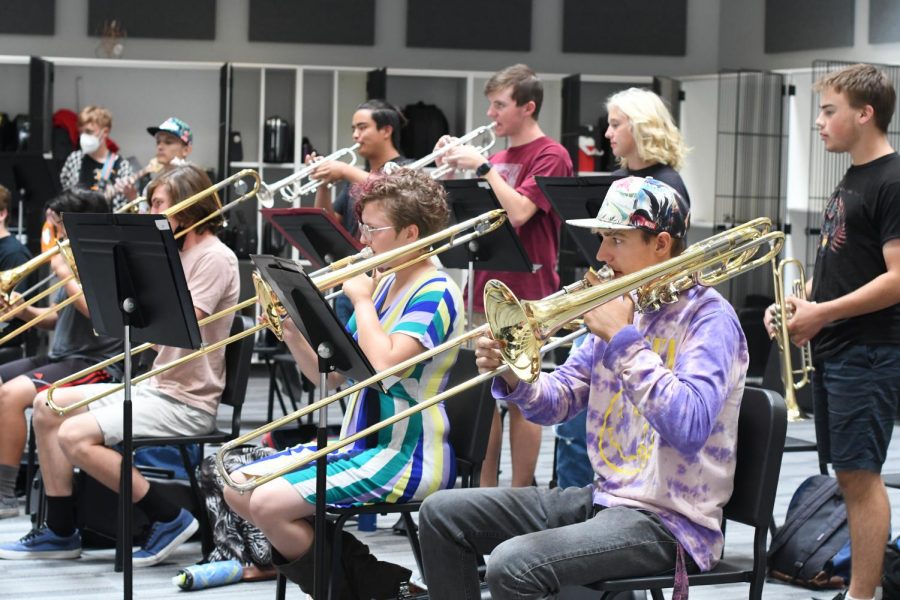 Alta High’s Band Room is in Need of Another Remodel

The renovations at Alta have really had amazing results, however, Alta’s band has not received these same results. Though the Performing Arts Center seemed to please just about everyone, the new band room is pleasing no one, especially the band students.

“The biggest issue [with the band room] is that there isn’t enough space at all,” says oboe player and member of the Alta Instrumental Council, Sarah Hamilton. “We can barely set up, and it’s really cramped. The best way to set up has the whiteboard on the wrong side of the room. There is also very little storage. Between marching band storage, percussion, and instruments there isn’t enough. The lockers are too small for lots of instruments. The lockers just won’t close and we have to put the instruments in the band room which takes up more space in the band room. We also have to use practice rooms to store stuff which creates the risk of damaging instruments.”

The band room is nonfunctional. Trying to learn an instrument and practice that instrument becomes difficult when you don’t have the room to do so. “The space is the biggest problem, and if that is fixed everything else would be better,” continues Hamilton. “The district promised us a percussion room but cut it from the budget 3 years ago without telling us. They have now promised to make the room, but the band room is still not functional.”

Sarah Hamilton explains that the band room was created without the consideration of the needs of a high school band. The gesture of making a band room was nice, but the execution was a failure. In addition to the lack of space and functionality, the practice rooms are not soundproof whatsoever. “You can’t practice in them while anyone is using the band room and it is way too loud inside them, it hurts your ears.”

There may be hope for the band soon. Today (Thursday, September 16, 2021) there will be a meeting at 3 pm in the band room consisting of Alta Instrumental Council members: Sarah Hamilton, Alex Miller, Eli Glende, and Tyler Hansen. In addition, parents of the band students, Mr. Shabestari (or “Shabs”), Leon Wilcox (Canyons Financial), Amanda Oaks (District 6, Vice President, Board Member), and possibly President of the Canyons School District Board of Education, Nancy Tingey, will plan to attend the meeting.

“[The current band room] is a downgrade from our old band room. Our old, crusty band room was better and more conducive to learning than our supposedly nice and new one will ever be, without a remodel,” explains Sarah Hamilton.

As it stands, the band room is a mess. It makes it nearly impossible to practice. They wouldn’t make a computer programming class without computers, so why would they make a band room without space? “Music matters too” explains Sarah Hamilton. The band students deserve just as much of a right to practice their art as much as any other group in the school to practice theirs.