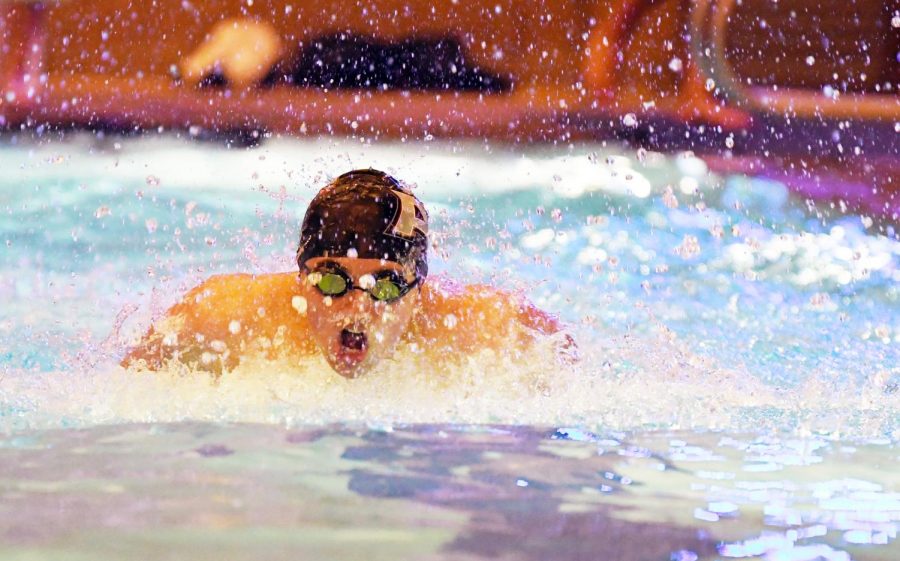 The 2021 Alta Swim Team is officially back and ready to dive into another season as tryouts have passed and practices have begun. However, this year started with a couple noticeable and exciting changes.

I have high hopes for this season and I can’t wait to see what the team can do.”

“I’ve said it since the beginning of the season, we’re not gonna have a season like we did the last year,” says Coach Kimble. “This year I came into the season knowing that we are going to break records. It’s more than just knowing that we are going to do well, it’s going to be that we are breaking Alta records, making Alta history. I know two or three of the records are going to fall off the board. Like, we haven’t had a new record broken since maybe 2012. It’s been almost 10 years and we’re due.” And yes, this season will be different from the last, but in more ways than one.

One of the biggest reasons for this season being different is the lack of COVID-19 restrictions. In the 2020-2021 swim season, the Alta Swim Team faced many issues regarding their ability to swim at their home pool, Dimple Dell Recreation Center. Dimple Dell temporarily closed their doors to swim teams. Other swim teams also felt the same backlash as some Salt Lake County pools and high school owned pools canceled swimming plans, due to a rise in COVID-19 numbers. As swim teams suffered from a lack of practice, so did the number of meets.

Without pools being open and without proper training, many meets were canceled. And when there were meets, they were either separated by gender to limit numbers, or held in a way to keep swimmers off the pool deck to limit exposure. “It’s nice to not have those restrictions this year: we don’t have to be thinking about ‘are we going to be out of the pool for a couple weeks?’, ‘are we going to have to find somewhere else to swim?’, ‘are parents going to be able to help out?’, or ‘how are we going to rearrange swim practices and meets and everything?'” says Head Coach, Kristina Kimble. “It’s nice to not worry about it but still, sometimes I do worry even though we did really well last year with COVID as a team. Honestly, I don’t think another closure will happen. I mean it’s always a possibility of new variants coming in and things like that, but with what we have right now I don’t think that a closure due to COVID is going to happen.”

On top of all that, the team’s tradition to hold team dinners after home meets wasn’t carried on. These team dinners gave swimmers a great opportunity to celebrate together and even unite as one after after losses. The dinners were not held again due to COVID-19 in an attempt to limit exposure. Captains and coaches are optimistic that the team will be able to hold the dinners.

“Without team dinners, the team didn’t feel as united,” Senior swimmer, Emma Stapley explains. “Since we weren’t able to cheer each other on during races, I didn’t feel as connected to my teammates. Swim is a lot more enjoyable when we don’t have COVID restrictions- especially since we don’t have to wear soggy masks.” “I mean I love the Alta Swim Team regardless, but yeah last year was a mess and I’m so excited to have unsplit meets and team dinners again,” adds Junior swimmer, Eabha Heneghan. “I can’t wait to feel like a team again.”

Though the connectedness of the team was lacking last year due to no team dinners, Coach Kimble assures that this Alta Swim Team tradition will be coming back. “We will be doing team dinners. We’ll have precautions such as meals being more ‘grab-n-go’ meals and trying to spread people out both outside and inside, but we’ll definitely, more than likely, have team dinners. We’ve been given the clearance as of now to host team dinners.”

Another noticeable change for the Alta Swim Team was the coaching staff. At the end of the 2021 season, swimmers had to say goodbye to beloved Head Coach Clark Etherington and Junior Varsity Coach Elissa Etherington. Kristina Kimble, returning swim coach and teacher here at Alta, has stepped up as Head Coach. Other coaches include former Alta Biology teacher and returning coach Marni Paystrup, and Alta Alumnus swimmer Amber Gassman.

And with each new year comes a new set of captains. This year there are 8 team captains: 4 girls and 4 boys. Captains include Caroline Affleck, Lauren Gassman, Tyler Hansen, Maggie McDonough, Sam Royce, Jaden Tu, Ryan Watt, and Jane Wetzel. This year the team is putting captains in charge of a specific group of swimmers to provide support and feelings of inclusion.

“I’m feeling really excited about the upcoming season,” says Team Captain, Jane Wetzel. “We have an awesome team this year. As a captain, I’m excited to make new connections with the team and see where this season takes us!”

The team has around 50 students participating this year. Coach Marni Paystrup explains that the team has a lot of returning swimmers who are passionate about the sport and very successful, with only a few ‘newbies’. “The smaller team is giving us better freer space to work out,” Coach Kimble explains. “We now get to work towards better, quality workouts.”

The first meet this season will be the Regional qualifying meet Friday, October 29th in Provo. This meet provides a basis for the competition season, giving swimmers an individual race time to beat by the end of the season, and also shows officials which schools should compete against each other.

The Alta Swim Team is finally back and ready to race their way into their best season yet!