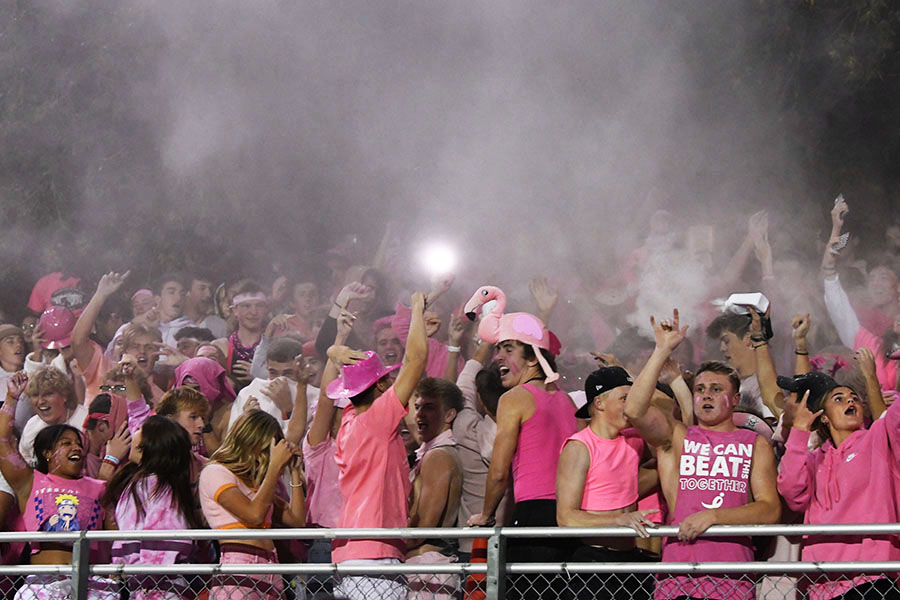 Students throw baby powder at the beginning of the Alta v. Jordan football game Thursday, causing a delay of game.

The crowd at Thursday’s Alta v. Jordan football game roared; both student sections got into action, but by the second half behaviors quickly stepped over the line.

Hundreds of Alta students piled into the visiting bleachers at Jordan, dressed in pink for Breast Cancer Awareness Month. Jordan’s Cheer, Drill and Dance Company performed at half-time, with a number by the Jordan “Mini Cheer.” It was a normal game, a normal halftime, and normal experience.

And then things took a turn for the worse.  In days prior to the game, it was alluded that the student section would be egged. Jordan students snuck behind the bleachers of Alta’s section and began throwing eggs. Many eggs landed on the walkways and track in front of the bleachers. Alta students were pummeled.

Student Jordan Cai thinks that Jordan “did it just out of pure teenage spite.” This game was a big rivalry game, since Jordan and Alta were big competitors before Corner Canyon was built. “Jordan decided egging was the best option to prank our students.”

Assistant Principal Jared Tucker estimates at least two dozen eggs came from behind the bleachers. Anyone who has ever cleaned up egg knows it’s a mess and very difficult to remove once it dries.

The rivalry manifested itself on both sides, however. According to Assistant Principal Steve Bailey, Alta students were not completely blameless in the stadium mess. “Jordan students escalated things and took everything too far,” Bailey admitted. “But, we weren’t totally innocent.”

After issues arising at the last couple of games, the Admin had warned the student section, and the boys who lead the shouts, to stop doing “chants that were demeaning towards the other team or provocative.” Following the egging, Jordan Cai led the students in the “This is our house” chant, which added to the tension and was ultimately the cherry on top.

Admin claimed that they had to evacuate students due to the safety hazard of smashed eggs, but also due to the disruptive behavior of Alta students. Jordan Cai thought that they moved the students to stop the egging and prevent parents or non-student crowd from also being hit. Students were not happy about the outcome of the situation, after being egged and getting kicked out. Many students thought that the only reason the crowd was kicked out was because they were in trouble for the egging- that they didn’t do.

Both Tucker and Bailey are disappointed that the friendly rivalry turned bad. They wish students would think about others and those who have to clean up the mess before they do anything messy, disruptive or violent. In the future, students will have to be more disciplined to enjoy the privilege of the student section.