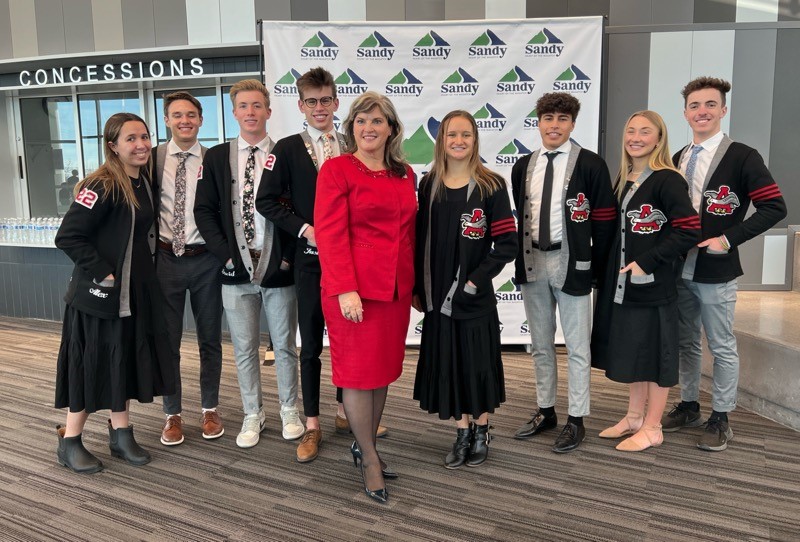 Newly elected Sandy Mayor Monica Zoltanski poses with Alta Student Body Officers prior to the city’s swearing in ceremony for the Mayor and newly elected members of the City Council.

The Glass ceiling in Sandy was just broken today, with the swearing in of former city council member Monica Zoltanski as Sandy’s next and 27th mayor in Alta’s Performing Arts Center.

Along with Zoltanski, several new city council members were also sworn into their respective positions. This includes Ryan Mecham for District one, former at-large city councilmen, Zack Robinson for district three, and Brooke D`Sousa for the at-large seat.

The Introduction and closing remarks were made by Salt Lake County Sheriff Rosie Riviera. Along with Riviera Lt.Governor Deidre Henderson delivered some opening remarks, including that she is happy to have the first women mayor in Sandy and is looking forward to working with the city. The keynote speaker was Representative for Utah’s 3rd congressional district, John Curtis.

“Too often we expect perfection, but that is not realistic” Curtis said. “Your success comes from the people.”

Along with the Lt.Governor and Representative Curtis, Jordan High School Madrigals performed the National Anthem and a Musical Interlude. The performance by the Madrigals even won praise from county Sheriff Riviera, telling the crowd “it brightens my day.”

Zoltanski in her speech noted her commitment to the residents of the city stating, “Sandy City government works best when it reflects the people we serve.”

One of the items on Zoltanskis agenda is to help increase civic engagement.

Curtis noted that local government is closest to the people, so citizens must remember to stay civically engaged.