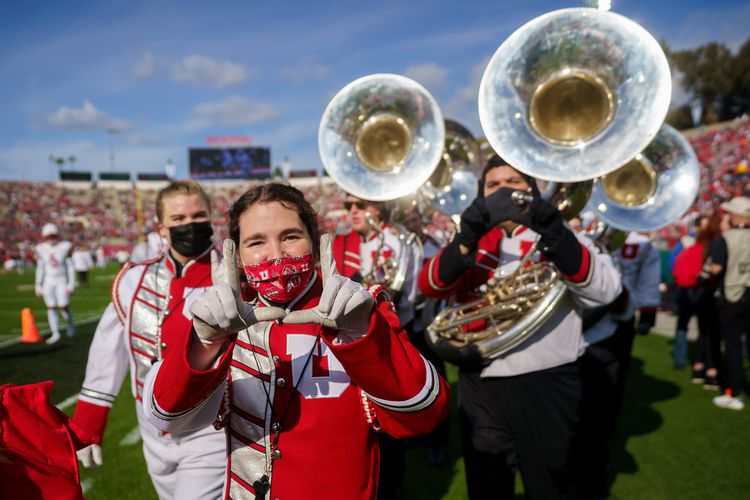 The University of Utah Marching Band at the Rose Bowl.

Former Alta High student, Brandon Lupus, had the opportunity to play with the University of Utah Marching Band in the 100th Rose Bowl. Taking place in sunny Pasadena, California, the Rose Bowl is often referred to as the “granddaddy of them all”. This annual game began in 1902 and brings football fans from all over. Every year, fans can expect an exciting game with high competition between the top Pac 12 and Big Ten competitors.

Brandon described the energy at the Rose Bowl as “incredible”. He went on to say, “the most energy I’ve ever seen at any [college football] game was when Covey ran the 97 yard punt return.”

The football game, however, was not the only contributing factor to the energy at this football game. The University of Utah Marching band was an integral part of the game day experience. A wonderful performance can help boost the morale of fans and add another element of entertainment to the game.

“Being on the University of Utah snare line is one of the biggest honor I’ve gotten the opportunity to be a part of,” Brandon explained, “ I love getting to play with other amazing musicians who are all so passionate to help deliver an incredible and unique sound that you can’t hear anywhere else.”

The University of Utah Marching Band is often referred to as the “Pride of Utah” and the name fits. When fans hear the sound of the band and the fight song, they are ready to support the Utes and cheer them to victory.

According to the Alta Alum, if any Alta High School students are looking to join a group like the “Pride of Utah”, the most important thing they can do is be passionate. Lupus stated that,  “Sometimes it might seem like a group with such a history of excellence is hard to join but with enough drive anything is within your grasp.”