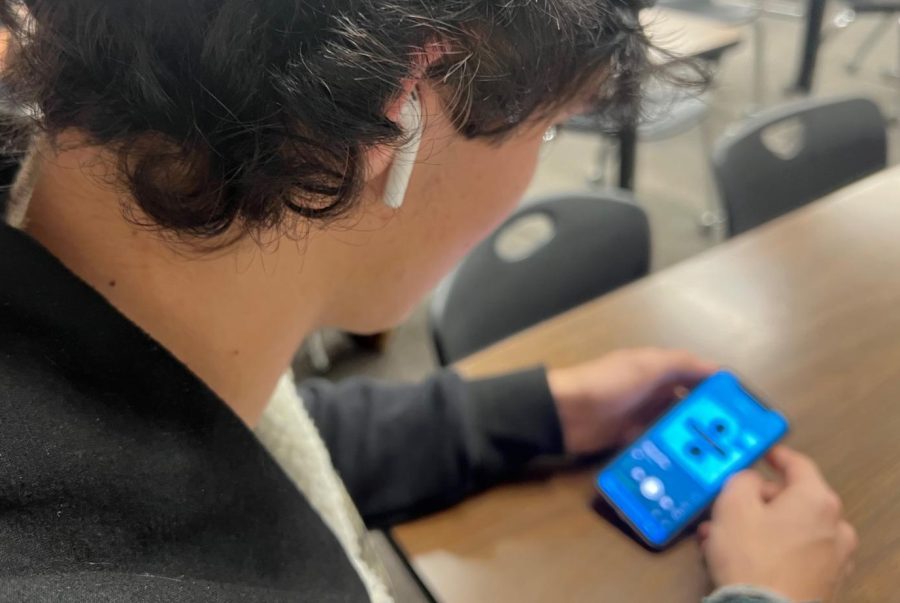 Student Jack Ward listening to music with his Airpods.

Is Music Beneficial for Students?

Why are so many students listening to music in class?

Is this generation more drawn to music than others before it?

As years go, on teachers have started to notice more kids are asking to listen to music in their headphones during class. People in workplaces are using headphones more often as well. Forbes article “Millennials Are Relying On Music For A Better Workday” mentions that the modern workday is noisy and noise can lead to stress. Author Sarah Landrum also states that stress can lead to poor decision-making, which could impact classrooms or work environments.

“For teens, music often takes on an even greater significance—it can contribute to the process of identity formation.””

Sadie Reynolds, a senior at Alta says “Yes, it is difficult to work in those circumstances [loud classrooms].” She adds that “music actually helps me concentrate even when it’s silent. I’m able to have something more calming or tame.” Sadie isn’t the only one who thinks that way. 93% of Alta students agreed that music helps them focus in class, while only 7% disagreed.

Another article called “Music Fosters Healing for Teens” shows how music benefits everyone by stating that, “from stress relief and self-soothing to emotion regulation and physiological benefits, music plays a powerful role in mental health and well-being for many people.” Mental health plummeted during the pandemic which makes music even more helpful for teens. The same article also stated, “for teens, music often takes on an even greater significance—it can contribute to the process of identity formation.”

Is this considered rude? Mr. Farnworth, Psychology teacher at Alta, explained that when doing something that only takes up a portion of your attention, it could help the brain if there’s also something going on in the background to fill empty space. Ms. Thomas, a math teacher at Alta, says that she’s okay with students using their phones, “As long as they are doing their work.” However, Ms. Hawkins feels the opposite, “…sometimes students will ask me questions and I’ll be like I’ve already answered that.” She says she notices the kids that have her repeat herself normally have headphones in. She also thinks that it can distract other classmates.

Music can help improve mental health, so as mask mandates are coming back and people are starting to self-quarantine, music is essential. However, students need to understand that there are appropriate times to listen to music in class.