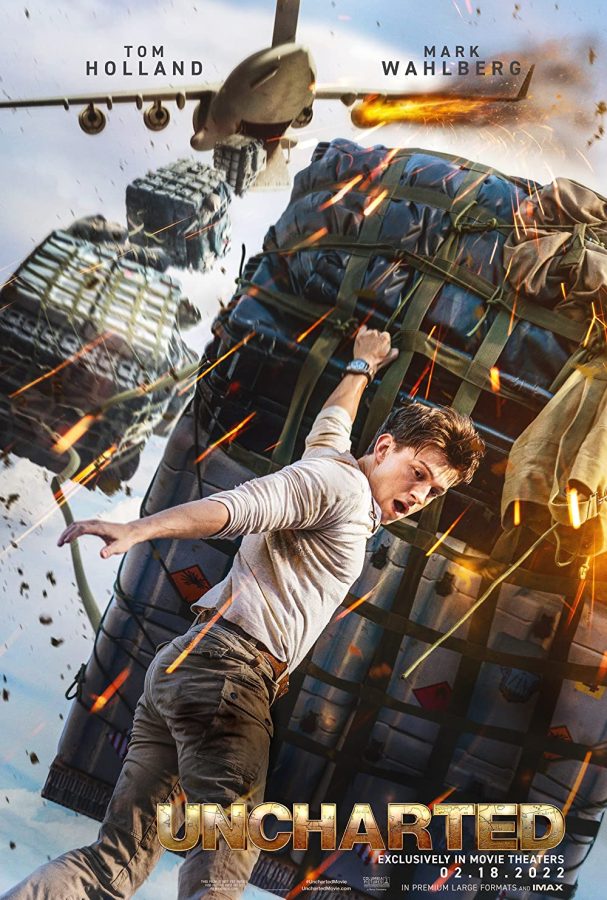 Uncharted is about Nathan Drake by Tom Holland and Victor Sullivan by Mark Wahlberg embarking on a dangerous mission to find the greatest treasure never found while tracking clues that could lead to Nathan’s long lost brother.

Nathans brother, Sam was last seen at the orphanage they both lived at climbing throught a window. the reason he was running away was because young Nathan by Tiernan Jones and his brother Sam by Rudy Pankow tried to steal a museum treasure map that pinpoints the route Magellan took when he discovered, and then hid, a priceless bounty of gold. They ended up getting caught by the authorities. Rather than face legal justice, he runs away. But before he runs away Sam gives Nathan a ring attached to a necklace that has their ancestor Sir Frances Drake’s motto, “Sic Parvis Magna” (translation: “Greatness From Small Beginnings”).

Tom Holland is an amazing actor starring in movies such as: Chaos walking, Spiderman Far From Home, Avengers endgame, and more. Now he is starring in his first video game inspired movie “Uncharted” he plays the character Nathan who is in search for the treasure which him and his brother tried to find as kids. He is also tracking the clues of his brother who has sent him postcards every year with different countries on them.

Mark Wahlberg is another fantastic actor starring in movies such as: Daddy’s home 1 and 2, Ted 1 and 2, and more. Now he is also starring in his first video game inspired movie “Uncharted” he plays the character Victor who is in search of the treasure left by Magellan.

Johnny Oleksinki from New York Post says: “Uncharted,” you say? That’s a funny title for an action-adventure movie that doesn’t stray one inch from the well-trodden path of what came before it.

“Indiana Jones,” “National Treasure” and “The Mummy,” just to name a few, are all dead ringers for this poorly written buddy quest film — and leagues better, too. I suggest a different name for the latest entry in the genre: “Derivative!”

Charles Pulliam-Moore from The Verge says “Columbia Pictures’ new Uncharted move from Venom director Ruben Fleischer is a testament to the idea that the longer much-buzzed-about adaptations of beloved franchises linger in development hell, the more likely they are to emerge from it — that is if they ever do — as warped misfires that might have been better kept in the drafts. Uncharted isn’t the first movie this is true of. But unlike so many other adaptations in this class, which tend to feel hamstrung by a lack of understanding of what people like about the source material, you do get the sense watching Uncharted that everyone involved vaguely “gets” what all the fuss is meant to be about. Uncharted knows what it’s supposed to be — the problem’s that it is profoundly uninterested in being that thing.”

Sam Machkovech from Ars Technica says “Imagine a video game sequel that does away with pretty much everything fans liked about the original. There’s less action, uninteresting puzzles, boring environments, plot holes big enough to drive a “Hog Wild” seaplane through, and, perhaps worst of all, dull dialogue. This imaginary game opens with an interminable 80-minute cut scene, only to be followed by an energetic action sequence that recalls the original game’s best moments.”