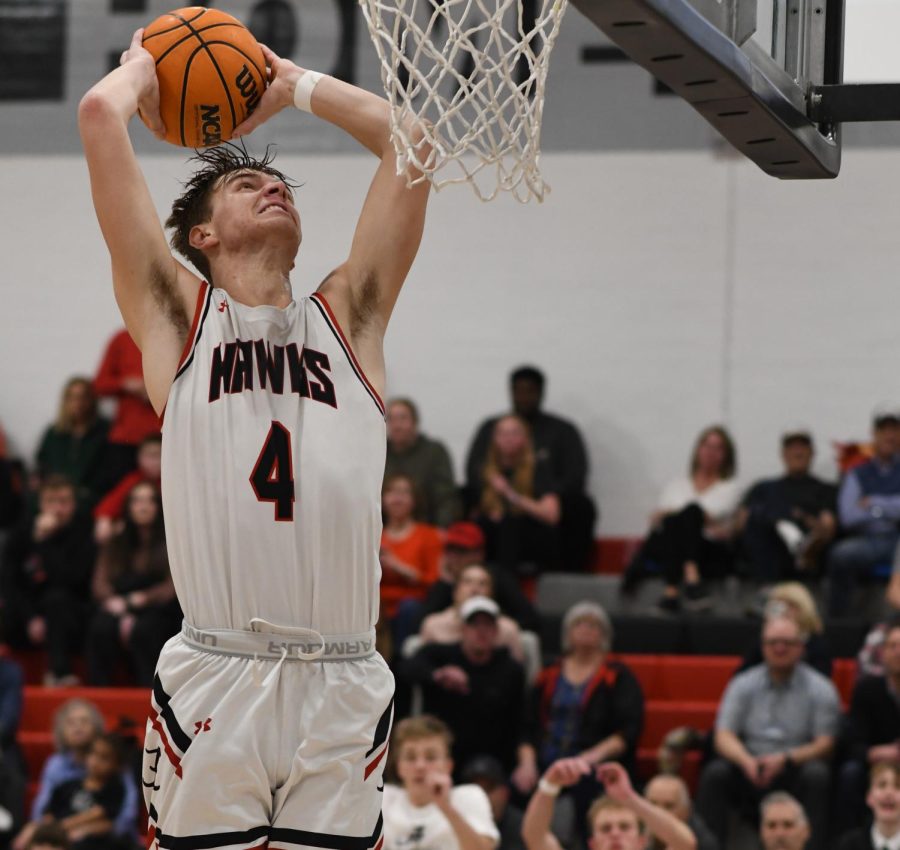 Jaxon Heiden goes up for a dunk in their game against Timpanogos. The boys clinched the Region championship with their 63-53 win.

Boys Basketball Season Wraps Up on a High Note

The team credits their success to hard work and their coaches.

The Boys’ Basketball Team ended region play on a high note with a 63-53 win against Timpanogos.

As the game ended, the boys clinched first place standing in Region 8.

In spite of injuries throughout the season, they hung in there and managed a 73 percent win rate. They are now in third place in the state 5A division and number one in region 8. With their first state game tonight, they plan on going even further.

Senior Jett Lundberg has plans to go far. “We work together as a team and it’s so fun,” he said. “I am excited to see how far we go in the tournament.”

One might ask how why the team is doing so well? The team credits their success to their hard work and their coaches. It can be hard to get a new coach especially during your senior year, Lundberg said. However we’ve worked hard and made it work.

The coaches have made this season so enjoyable and fun that we love going to practice everyday and love playing hard for them.”

Lundberg said the new coaches under the direction of new coach Travis Ohrn have been a big help and reason why this season has been such a strong success. “The coaches have made this season so enjoyable and fun that we love going to practice everyday and love playing hard for them.”

Coach Ohrn has enjoyed guiding this year’s team. He said the players do a “phenomenal job just being a great team.” He’s looking forward to the state tournament to see how far the team can go.

“The state tournament is always wide open,” Ohrn said. “We just have to play our game.”

Ohrn acknowledged that both he and the boys have been to the state tournament before, so it’s nothing new. “Anything can happen,” he said. “We just need to do what we do and hopefully things will take care of themselves.”

The team has suffered some injuries over the season, so many people had to step up. “This could’ve been very damaging to a team but luckily for the team it made us closer,” Lundberg said.

To those who are looking forward to joining in future years make sure to be prepared for the hard work that goes into the team. When asked what advice Jett could give lower classmen he said, “You get out what you put in. Put in the work and you’ll be great but make sure you enjoy the ride as well because it goes fast.”

The team has a bright future and everyone is excited to see what happens next.