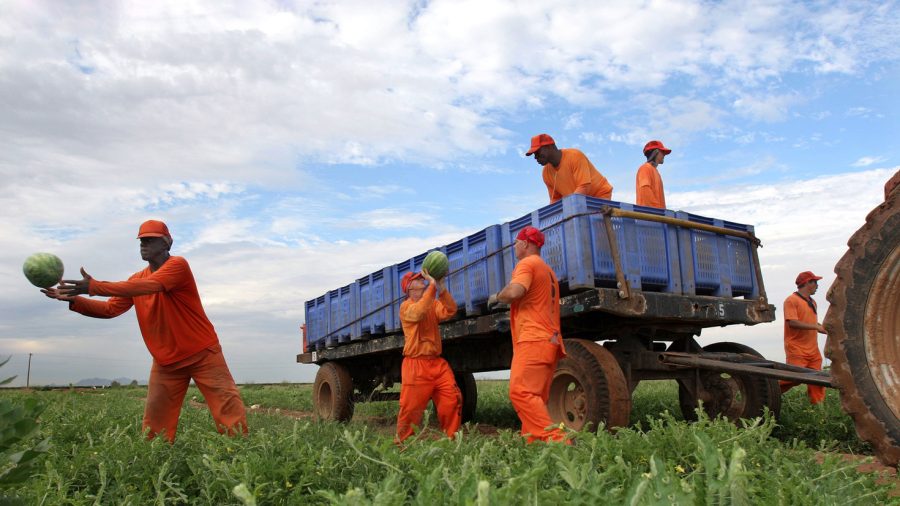 Forced Labor – Modern Slavery in the U.S. Prison System: There are no minimum wage or overtime pay requirements for prison work.

With only five percent of the world’s population, the United States has a higher incarcerated population five times what it should be; the country has one quarter of the world’s prisoners. The incarceration rate and prison system of the United States is one of our most inhumane issues. In fact, it may be one of the biggest problems in the country.

There are so many injustices with this system that listing them all would be overwhelming, though some need to be acknowledged: Inhumane conditions ranging from solitary confinement to abuse from guards against prisoners are commonplace in United States prisons, both of which are human rights violations.

Explanations for these injustices range from capitalist exploitation using sub-minimum wage forced prison labor for the profit motive to racial discrimination and the lasting effects of slavery, segregation, and genocide. To truly understand the massive issues the United States faces in regards to the prison system, we must first understand how prisoners in other developed countries are treated around the world. What better example to use than Finland, the country with the most humane conditions and ethical practices.

Instead of addressing the symptoms of a broken system, or even actively making the system worse, like we do here in the United States, Finland and many other European nations attacked the roots of the problem and sought to change their system entirely. Following the European model of what a good prison system should look like, we are able to see what America’s future could be.

By not criminalizing things that shouldn’t be criminal in the first place like drug addiction, shoplifting for survival, homelessness, and more like the United States has done and putting in place social programs to help those in need, many European nations have already solved the largest motivator for crime: poverty.

Portugal’s decriminalization of all drugs allowed those that needed help for drug addiction to get better. A court in Italy ruled that stealing food out of necessity is not a crime, a precedent many cities, including in California, have begun to adopt. Lastly, Finland’s ‘Housing First’ program is the single best example of how socialized housing can reduce crime and homelessness. The program was so successful that Finland’s homeless population was less than 4,500 people even during the pandemic.

With the largest motivators for criminal activity neutralized, Finland and other developed nations focused on rehabilitating the prisoners in their care. They are only able to do this, though, because the government, not private corporations, operate and maintain the prison system of Finland. America, as usual, is the exception.

America, along with only a handful of other countries, many of which are still developing, is one of the only nations that has a large-scale private prison system. We of the United States, the supposed land of the free, have prisons owned by private corporations that have the sole purpose of operating for profit. It just so happens that the more people locked up in those prisons the more money the corporations make, tying this system, along with most other issues in the United States, back to capitalist corruption.

Finland and most other countries around the world have never had this issue. Without the profit motive, those in control of the prisons do not have to worry about how much money will be generated off of these prisoners. Instead, they can focus on actually reforming the prisoners and changing them for the better.

The nation ended solitary confinement with exceptions to extremely rare circumstances, and the effects of doing so have only been positive. Prisoners report a higher level of happiness and are less susceptible to mental illnesses. If ending solitary confinement really is a net benefit to society, then why has the United States not done it yet?

Simple. America has a culture of dehumanizing criminals and treating them as dangerous despite violence not even being the main reason people are sent to isolation. However, the goal of prisons is not to isolate a prisoner from society, it’s to take away their freedom of living as a regular citizen.

“Prison relieves us of the responsibility of seriously engaging with the problems of our society,” says Angela Davis, a famous black activist and author of Are Prisons Obsolete?, “especially those produced by racism and, increasingly, global capitalism.”

The United States prioritizes locking people up for the sake of ‘reducing crime’ instead of putting people in prisons for the sake of making them better. Which sounds like a better goal to you? If you agreed with the former, keep in mind that incarceration is not actually a good way to reduce crime. In fact, incarceration is not usually an effective way at curbing recidivism and is not a good deterrent at all. Rehabilitation, however, is an effective practice. Finland has a recidivism rate of one in three prisoners, one of the lowest in the world. This is the result of their excellent and innovative rehabilitation programs.

The role of prisons is to take away freedom of movement, not revenge. Revenge is not justice and retribution should not be a valid way to punish people. Instead of having a system that constantly makes prisoners’ lives worse, we should advocate for the more humanitarian position: Wouldn’t it be better if, instead of doling out revenge against someone for a crime, that person becomes a better person, and doesn’t do any crime again?

This thought process was implemented in Finland, and their results prove themselves. Compared to the U.S.’s six in ten recidivism rate, Finland’s system seems desirable and something the United States should strive towards.

Their open prison policy allows nonviolent criminals to leave and return more freely so they can still contribute to society. The Finnish prisoner job training program gives the incarcerated a way to learn new skills, develop better mental health, and give them a way to integrate back into society when they are released. Prison cells with comfort objects personally customized to the prisoners’ preferences boost inmate morale and lead to a more humane environment have also produced positive results.

“We have this kind of normality principle that prisoners should be treated equally even though they are prisoners, but they should have access to the same services and rights as other citizens,” says Pia Puolakka, project manager for Finland’s Smart Prison Project.

While the average American may think that this would incentivize more crime, that is just not the case. This is for the simple reason that Finland’s government provides extraordinary benefits to their citizens that incarceration is still not preferable to life as a free civilian.

So how can America, the richest country on Earth, not have the ability to grant those same benefits to our people? The answer is not surprising. The United States has a government created for the rich. The rich, who in turn, benefit from the exploitation of the lower class, especially from prisoners.

The way our prisons are designed are also not friendly to inmates. In fact, traditional prisons, which take up almost all U.S. prison designs, are so bad that Finland has turned one of them into a museum to show how inhumane the system is. Finland’s prison system is so much more humane compared to ours that the nation has a reminder of what monstrous, dehumanizing incarceration they should avoid at all costs: The average American-styled prison.