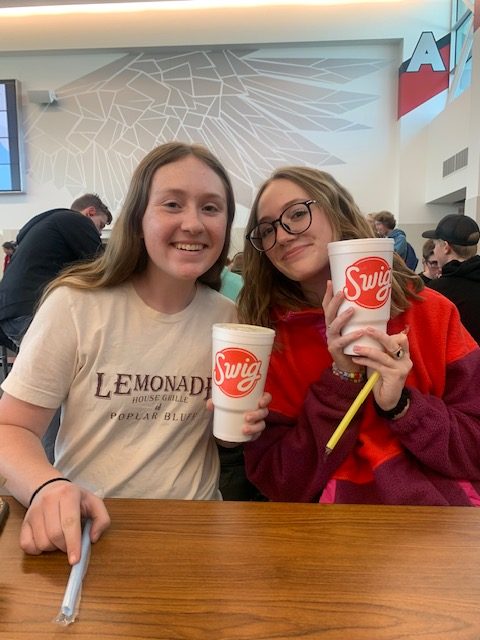 Swig: The Unofficial Drink of Alta

Swig, a popular staple for numerous Alta students, is loved by many, but why? Why does it have its popularity and what makes it so appealing to Alta students?

In 2010, the first Swig opened and it has expanded since with 38 different locations. Students at Alta have been attracted to the treats Swig sells such as sodas and refreshers, rice crispy treats, and pretzel bites with a choice of dipping sauce. Madi Hilbig, a senior at Alta, says “I like the refreshers because they are refreshing and the fruit in the drink is delicious. It makes me feel better that I’m not drinking soda, but substituting it for something just as good.”

“I love Swig because it offers various flavors to classic soda tastes. My personal favorite order from Swig is the Texas Tab with Coke instead of Dr. Pepper,” says Brooklyn Anderson, a junior at Alta. “I also really appreciate how fast the line is, which means I can go during lunch and get back in time for class.”

A common appeal for Hawks has to be taking Swig trips with their friends.“I love going on drives with my friends to get a delicious Swig treat,” says Senior Alex Berry. “It’s so much fun to go on a drive with friends and end up with a tasty Swig.”

Recently, Swig presented multiple opportunities for several lucky customers to win a golden tumbler that gives them free Swig for a year! As a junior at Alta, Jake Harris was one of the thousands giving their all to win one of the golden tumblers. He loves Swig because “Swig has affordable prices compared to Starbucks and Dutch Bros for the same amount of caffeine.” Even though we haven’t seen Jake as one of the winners yet, he still loved participating in trying to win a golden tumbler. “I loved being a part of the competition because it gave me a chance to be creative and of course have an excuse to buy a new Swig tumbler.”

However, Alta does have its own free Swig for a year winner. Mrs. Summerhays was one of the most recent winners in the week two competition. “I’m so excited about winning! I tried last year too at the competition but I didn’t win,” says Mrs. Summerhays. “The odds were against me, I mean it’s like a 0.05% of me winning, like one in a million but I still won, despite people telling me I wouldn’t.”

“It’s easier to ask what didn’t I do to win,” explains Summerhays.“ I’ve turned myself into a TikTok star. That was like the fourth TikTok that I’ve ever posted and it got about ten thousand views. Week one I had to post pictures of myself and the day in my life. My students participated by pouring gold coins on me. Then I decided I would be a TikTok star because if Instagram didn’t work, TikTok will. Then I posted TikToks and my dumb one helped me win. Now Swig follows me on TikTok and they only follow 97 people, including Sprite, Pepsi, Coke, Mountain Dew, and me!” Even her students proudly admit to helping her win, an achievement they didn’t think they would get.

Swig is naturally part of Utah culture, especially Hawk culture. From its affordable drinks to its tasty flavors, and even one of its winners being an Alta Hawk, Swig has found its way to the hearts of Alta students and staff, unparalleled to other companies.