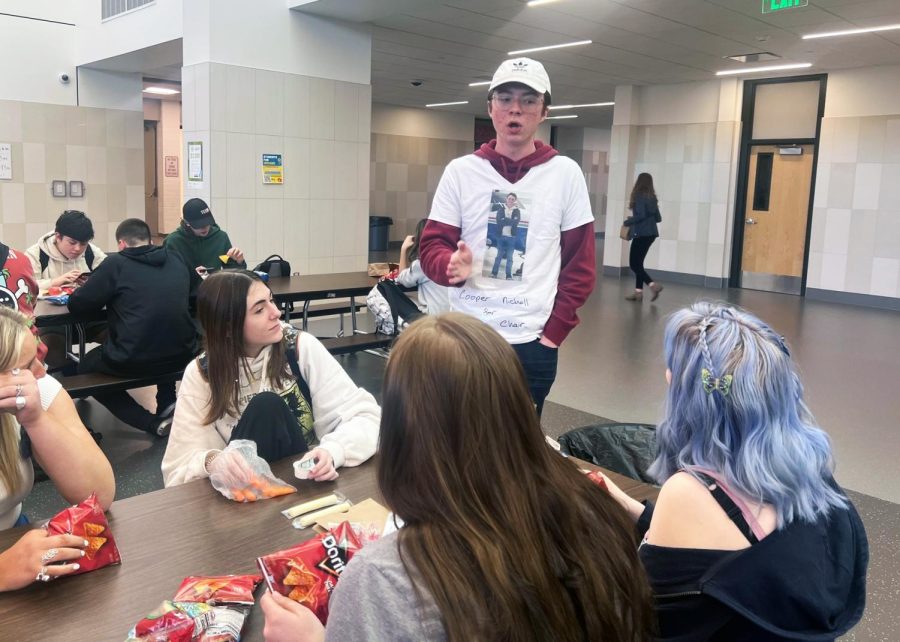 Cooper Nicholl, a candidate for next year’s Student Body Financial Chair, spent time during lunch discussing his platform with students.

The primary election will take place this week on March 23rd after a few days of campaigning from all candidates.

This week, the primary elections for the new student government administration officially began. Candidates for student body officer positions have started campaigning for their elections around the school and students may catch a glimpse of them during lunches.

Nine positions are up for election this year, with a few candidates in each category. The offices that students are running for include the president, vice president, secretary, historian, attorney general, financial chair, public relations officer, chief of activities, and the audio/video officer.

Surprisingly, the presidential election would go uncontested this year, as only one candidate has registered to run for office. The other seats on the student council, though, have either two or three candidates each competing for victory. The focus of this year’s first vote will then be on three key primaries: the vice-president, the attorney general, and the historian, which each have three candidates participating.

That is not to say students should not pay some attention to the presidential election, though. If a candidate runs unopposed, then they must still at least gather 51% of the primary vote to advance to the final election. If the candidate fails at this, then the office would be left vacant for the following year.

“Student Body Officers should be responsible, work well in a team, be creative, and be kind.” says Faris Kurdi, the Chief of Activities of the current student government. “Thinking outside the box is an important quality, as is being inclusive.”

The main responsibilities of the student government are to plan events for the school like dances and fundraisers and to be excellent representatives of Alta High School. Student Body Officers, or SBOs, should be good leaders and be role models that our peers can look up to.

While Alta SBO candidates are not allowed to carry or present physical posters and signs, they and a select number of their supporters are allowed to wear shirts that advertise their campaign. You may be able to recognize them on your way to lunch, so watch out for SBO candidates throughout the campus!

“I hope that in the future there will be increased student involvement in our school activities,” Shaylee Louder, the student government advisor says. “I would want the new SBOs to be good representations of our community and be a positive force in Alta.”

The primary election will whittle down the candidates for positions where more than two students are running to allow for a majority vote winner in the general election. The results of the primary will then be announced on March 24th and the candidates that receive the most votes in their respective categories will then move on to the general election.

The general election will occur soon after this on March 28th and the new student government will be selected by popular vote from their peers, who will have the ability to vote for their preferred candidates online in both elections.