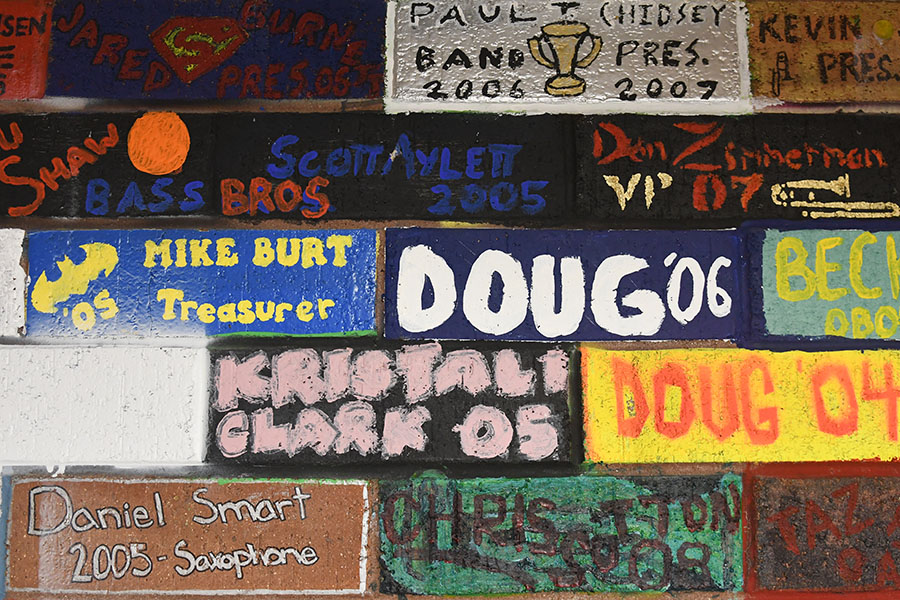 Painted bricks in the band room a reminders of memories from graduates from many years.

Students Say Goodbye to Band, Choir, and Theater Rooms before the Bricks Come Down

Classroom Memories come down as Construction Enters the Next Phase

As Covid-19 ends the school year with a depressing thud, Seniors and others alike are ripped from their chance to say goodbye to the spaces that they grew in. The drama, band, and choir rooms have been demolished, and with the virus preventing any students from going to the school, many have lost their final moments in these rooms.

“I think students are really excited to have the new space, but the old spaces are full of memories,” Struiksma says,”I think all students, but especially the seniors, are really feeling cheated of the cathartic experience.”

For Seniors, their graduation, prom, concerts, sports, and friends have been taken from them by Covid19, and now, for performing arts students, so have their goodbyes.

Memories upon memories, legacies upon legacies supported and surrounded these rooms. While they may have been old and decrepit, in need of renovation, they still meant something to people. Maybe it wasn’t the rooms themselves, but the symbolism they represented.

“The memories have already been made so at the end of the day we really don’t need to say goodbye,” Caleb Shabestari, band and orchestra director, states. “When I was a student in 2005, having my first band rehearsal…it was so cool to see a group of people so attached and caring for each other. I knew I was in the right place.”

Legacy, how does a building have a legacy? It’s memories like these, a click, of knowing you’re where you’re supposed to be, that add to a legacy. Ultimately, it isn’t the room, with falling Christmas lights, or butter stains on the ceiling, or thousands of posters that makes it home. It’s the people inside them.

Many people are also asking questions about the new Performing Arts Center (PAC), which is where drama, band, and choir classes will be held until their respective rooms are finished in Phase 3 of the renovations at Alta High.

Gary True, Vice Principal and Construction Head, said this about the progress on the PAC,”The state fire marshal inspected the PAC….During the inspection a code violation was discovered….Once corrected the state fire marshal will inspect the correction and if s/he approves the occupancy permit will be issued….There was also a “punch list” meeting … Simply put, the contractor, architect, and CSD personnel walk through the building and list all the things not completed as per the build contract. Once the contractor receives a written copy of the punch list, the contractor or his sub-contractors installs, repairs or replaces each item on the list.”

Long story short, there is still much to be done, but most of it is just simple finishing up. Covid-19 has definitely not helped the progression of construction though.

“The economic slowdown has caused problems with purchasing and delivery of materials. Which in turns slows the contractor down from completing the punch list,” True explained.

After the PAC is finished, it’s on to Phase 3 of renovations, which is much more intrusive on the Alta High populace. This encompasses the new Commons and performing arts rooms.

“Phase 3 started with the commons being walled off and demolition began. Construction slowed in the old commons area because it was disrupting the school day early in the school year,” says True,”With the PAC construction winding down, construction inside the school has rapidly increased since the beginning of spring break. If you drive by Alta you will see the steel frame of the new commons area. With the closure of school for the year, by order of the governor, contractors will get a head start on a very ambitious summer construction season.”

Hopefully, with this head start on construction, Phase 3 can get done faster than anticipated, and new generations of performing arts students will make new legacies in their new rooms.

With all this talk of legacies, it’s hard to ignore a pressing issue for all involved, the painted bricks. Many were hoping to see them reimplemented or preserved, but sadly that’s not the case.

“The painted bricks are a sensitive topic as per CSD policy,” True explains,”If someone painted a brick on the east or west walls then they are out of luck as these walls were removed at the first of the week. On the other hand, if someone painted a brick on the north or south wall then the brick is still in place but cannot be removed…both walls are load bearing walls – meaning they support the roof trusses. Undermining these walls (to remove the brick) would be unwise and dangerous. On the bright side, if their brick is on the north or south wall – it will remain in place as long as the building stands. Not a bad legacy.”

True did mention that there may be another project underway by teachers to preserve the bricks another way, maybe a digital recreation, but as of now, this is where it stands.
“Every year dozens of bricks are painted adding to the room’s legacy. It has created marriages and friendships that will last a lifetime,” Shabestari states.

Students Ebony Liu and Madilyn Bowles took photos of the bricks, so the they have been recorded. Liu and Bowles plan to make large collages so the legacy can live on.

When all is said and done, these rooms are just brick and mortar, lifeless, empty. What made them special, and a refuge for many, was the people who left their mark on it, but soon, there will be a brand new area with brand new memories to be made, and all that’s left to do is say goodbye.

Thank you, to the rooms that forged a family.