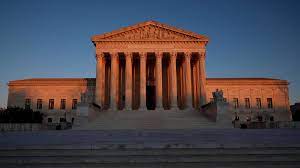 The Post-Roe v. Wade Nightmare We Have In Front of Us

The recent leak from the Supreme Court is much more than the right to an abortion, but it shows a radically new view of how the 14th Amendment could be interrupted and how the Roberts Court views liberty. The whole concept of the right to privacy is at stake and it only starts at Roe.
“I think it is important to look at what other rights are based on privacy and could a state start to rescind some of those rights,” said Alta High Civil Liberties and Civil Rights Teacher, Mr. Schilling. “What are the implications of getting rid of abortion in the long term?”
While however unlikely, the Supreme Court can utilize this legal theory in cases such as same-sex marriage, contraceptives, and even interracial marriage, among other unenumerated rights within the constitution. If the Supreme Court is willing to use this legal theory of strict constructionism or originalism in the Dobbs case (which will affect 50% of the population) I pose the question, what would stop this court or future courts from stripping the rights away to 5.6% of the population? I ask because as of now they are very close to doing so for 50% of the population.
This anti-abortion fight has now entered a new era. With states like Missouri and Louisiana proposing laws to make it illegal for women to go to another state to seek an abortion and to make abortion legally classified as a homicide, this puts the right to privacy even further in peril and it will not stop with abortions. Take a look at Alabama which recently passed a law that restricted trans youth from using medication for their transition. Though that law was struck down by a federal court, it shows the broader fight we have in the future over privacy rights.
If the Justices stick to the main premise of striking down Roe and Case, millions of women will be impacted. The whole US will look like a checkerboard of where abortion is legal and illegal. In Utah, for example, abortion will be almost entirely illegal due to Trigger Laws.
“I think it would be really horrible,” an anonymous female student at Alta said, “I think the Pro-Life side is trying to take down Planned Parenthood because they are anti-abortion. [Planned Parenthood] does a lot more than assist with safe abortions… [such as] STD testing, supply birth control pills, mammograms, cancer screenings, free menstrual products, among other services.”
Abortion services are a sliver of what Planned Parenthood offers. According to the Washington Post, only 3 percent of health care services are abortion services at Planned Parenthood. The bottom line is that services provided by Planned Parenthood serve and help millions of people a year with low cost affordable critical care. The Pro-Life side has been attacking Planned Parenthood and other similar providers indiscriminately with no regard for the other services provided.
From questions of privacy to healthcare, the Supreme Court is about the cross the Rubicon on Privacy, President, and Stare Decisis and lead America to an uncertain future on Privacy. Even if you are Pro-Life I understand your desire to preserve life, but so much is at stake, your very privacy rights may be taken away by the judges and justices you wanted on the bench. As Alito wrote in their draft opinion, “it is time to heed return the issue of abortion to the people’s elected representatives.” So vote, that is all that we can do at this point to not only protect abortion rights, but to truly protect privacy and women’s health.