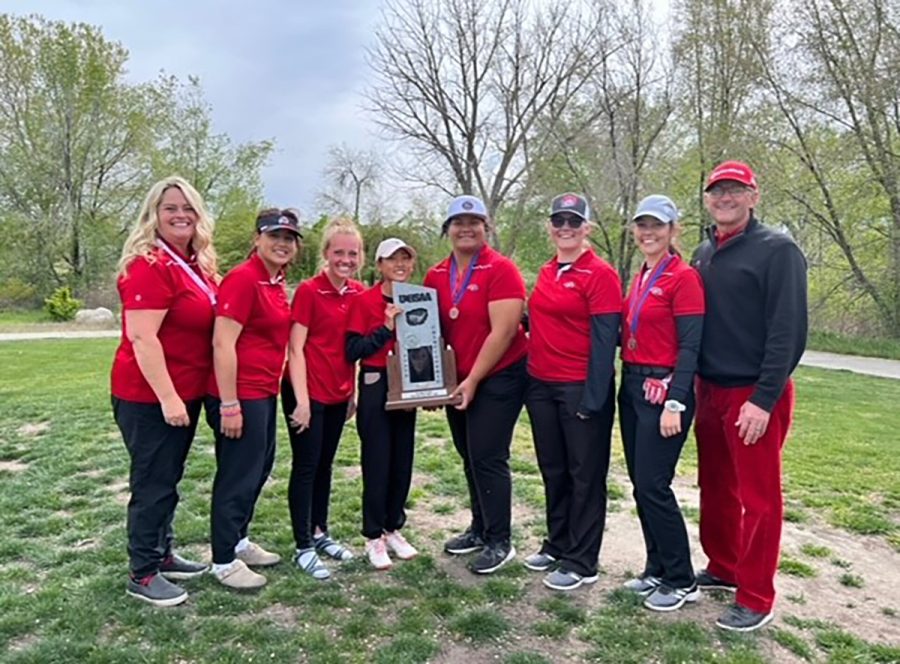 Preparation is the key to confidence according to Assistant Girls Golf Coach Karen Jack. That mantra applies to all spring sports teams this season.

One thing is for sure, athletes and coaches did well in region competition and hope for even greater rewards at the state level.

As the school year comes to an end, spring sports are finishing up on a high note.

The track team started off the season with a hit as many of their boys and girl runners qualified for State. The boys 400 meter relay team set a 5A state record. and the Boys 4×100 took first place.

The future looks bright for Alta track.  “We have lots of promising underclasses that will hold our team together once the seniors leave” said Senior Abby Hansen. “Once you join track you’ll love it. We like to say it’s a cult because who would run for fun but joining this team has to be the best decision I’ve ever made.”

The Boy’s Soccer team showed up and really gave it their all!

They claimed the Region eight title with a score of eleven to one finalizing them to be fourteen to two overall.

” The secret is our six amazing seniors,” according to Coach McKenzie Hyer. “Their leadership has been outstanding this season, focusing the team on unity, positive attitudes/efforts, and competitors.”

The boys will continue their quest for the state trophy this Friday against Brighton at .

Girls Golf won it all with their amazing team as they took second place in Regions and they went on to place second behind state champions Timpview at State!

The secret was to “Push the girls,” according assistant coach Karen Jack. ”

Head Coach Gary Schneiter said that preparation and many practice round make a huge difference in playing state.

That advice paid off with a stellar showing and a second place trophy.

The Baseball team worked together to improve all of their skills as a team.

They won six out of twenty-five games and find themselves ranked twenty-eighth in 5a. Players have loved having fun as a team this season.

“I loved being on this team and just being able to get out on the field with everyone and have fun,” said Junior Bentley Crook. “Being able to come together and work hard is all that really matters.”

Thirty of this year’s 39 players are freshmen and sophomores, so Coach Daron Connelly is confident Alta will be a team to watch in future years. “The players learned valuable lessons this season,” Connelly said. “Dividends will come one or two years down the road.”

“The growth of the program will continue,” he said. “This year was a year of development.”

Alta’s Softball team has been working hard as they improve their skills as a team and individually.

“We are having a year to build up our strengths as a team so next year our team can be the best of the best,” said Senior Cosette Harrison.

The Boys Tennis team find themselves doing very well as they are undefeated. They currently sit in the first place position!

They won the region for Varsity and medaled in six different spots during the JV region that took place a couple of weeks ago.

Junior, Richard Stratton loves “…competing for Alta and the community I get from being able to play tennis while hanging out with people that share a common interest.”

The boys head to the state tournament Thursday at Liberty Park.

Girls Lacrosse has come really far from where they were at the beginning of the season!

With 12 wins and 4 losses, the girls took on region competition and won. Playoffs are this week.

“The best thing about the team has to be the teammates,” says Senior Autumn Engstrom. She adds ” We all want to give it our all. The team is all best friends which makes going to practice every day so much fun!”

Boys Lacrosse is really doing great this year as they are currently have an undefeated record in region play. They head into state play on a high note.

Head Coach Brandon Horoba is pleased with this teams efforts this season. “The players all want the same thing,” he said. “They work hard to reach their goals.”

Coach Horoba is excited to see how far this team can go.

Senior, Luca DeLio said,”Alta Lacrosse has created countless memories for each of us but I think we can all agree the best part is the unbreakable brotherhood we all share.”

He also “loves the cool jerseys and helmets.”