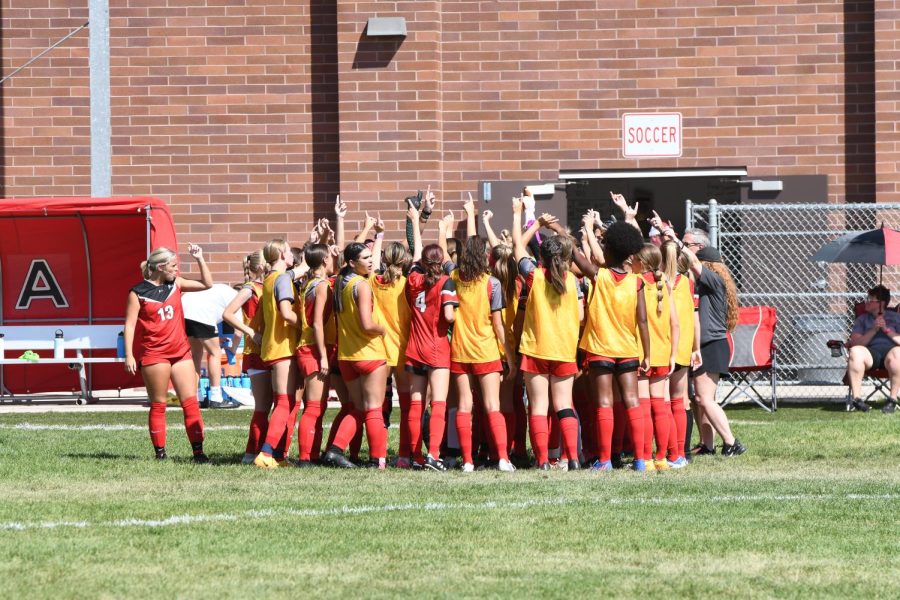 The soccer team huddles before their match against Lehi. The lady hawks beat the Pioneers 3-1.

Girls Soccer Off To Hot Start

The girls soccer team is stepping up its game as they push to match the boys to be a top contender in the 5A state tournament this year. The Lady Hawks are off to a flying start with an 8-1 record.

After a week with two massive wins coach Kenzie Hyer explains, “We have played almost everybody in our region and have good film to help improve our practices and get better.”

Hyer won her first state championship as a head coach last spring for the boys team and hopes to do it again this fall. She goes on to say, “1st in region and high in RPI is good but we can’t get complacent and need to continue playing well.”

These girls are a very tight knit group and hope that together they can win Alta Soccer’s 18th state championship, the last for the girls being in 2011. BYU track commit Elyse Jessen is confident halfway through the season saying, “It would be a dream come true to win state and we have the talent.”

Jessen goes on to say, “Alta soccer has taught me hard work and has given me my best friends.”

The girls have been rolling over teams, mercy ruling 2 times already. Senior Isabelle Smith who is committed to Utah University says, “If we play our best we can beat anyone.” She also says that her favorite part of being on the team is the team dinners.

After scoring 38 goals and only conceding 15 times in just 8 games, Peter Affleck states, “I love going to the girls games. They are usually high scoring and we always seem to come out on top. It is fun watching them.”

Ryan Richards agrees saying, “You can see how bad they want to win and bring energy into every game.”