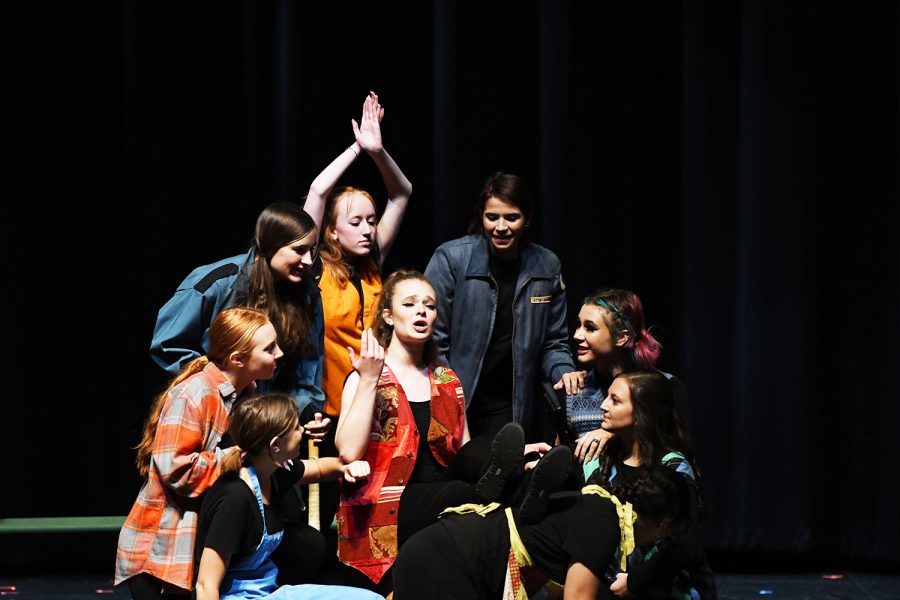 All The World’s A Stage: Alta’s Shakespeare Team and Musical Comes to Life

What have this year's theater students been up to this past month?

Well the die is cast, and so is the Shakespeare and Musical team.

The Shakespeare performances will be Wednesday at 7 p.m. in Performing Art Center.

What are the actors’ thoughts on playing Elizabethan era characters? What exactly is Shakespeare? What does the Musical entail?

On making the Shakespeare team and if others should look into it for next year Addison Scarborough says “Don’t be scared, it’s so fun. I have found an amazing community in doing Shakespeare and felt like a family, not just a cast.”

Scarborough is preparing for her role and mastering her dialect by ‘being okay with messing up and not afraid to ask for help.”

The highly anticipated fall musical Addams Family is well on its way to a successful and wonderfully haunting performance.

Tessa Osborne who will be playing ‘Morticia’ says she’s “Great and excited, to be able to make new friends and give it my all to perform” after being asked how she felt about being able to be part of the show.

Theater Teacher Lindsey Cline will be directing her first musical at Alta and is excited about this fun and energetic show. ” It’s one of my favorite musicals and our cast and creative team have really hit the ground running as far as making fun and interesting choices and developing characters.”

Cline admits that the challenge of putting on a show of this size is the limited rehearsal time and that much of the shows success relies on what individual actors are willing to do with their role. “We only have time to teach each dance, song, and scene once,” she said. “Our cast has risen to the challenge and is practicing on their own time to retain, rehearse, and perfect their performances.”

Osborne is also worried about not being memorized but is practicing as hard as she can. “It can be really difficult making sure I remember the order of all my lines with there individual tones and inflections.” she says.

Alex Llilinquist feels very lucky to be party of the show and maybe a little guilty because  know there are so many talented people who wanted to get in. “I love and have always loved musicals and am so excited to be part of this show.”

The cast is highly anticipating their performance and works hard each day at rehearsals to make the best show they can. Surely with positivity comes some nervousness: ‘I’ll just be trying to make sure I’m managing all my responsibilities because I have a lot going on this fall but I’m excited and it’s worth it.

The show starts by the curtains opening on the Addams family (consisting of Gomez, Morticia, Wednesday, Pugsley, Grandma, Lurch and Fester) as they perform “When You’re an Addams” the opening number speaks about family and sticking together.

Fester explains to the audience and the ‘dancestors’  that Wednesday has fallen in love with a boy, Lukas Beinike. Wednesday asks her dad, Gomez to not tell her mom, Morticia about her falling in love with Lukas until after they get married.

As Morticia just thinks Lukas is a friend she invites his parents to dinner. The night goes awfully wrong as Pugsley tries to poison Lukas to turn him evil but unfortunately, Lukas’ mom drinks the poison. After a long night with struggles, trials, a giant squid, and a whole lot of dance numbers, the show ends with an enticing end.

The Alta Theater Department has a lot in store and can’t wait to perform for live audiences. “This above all: to thine own self be true” and prepare for a show of Shakespeare and The Addams Family! (*snap *snap)