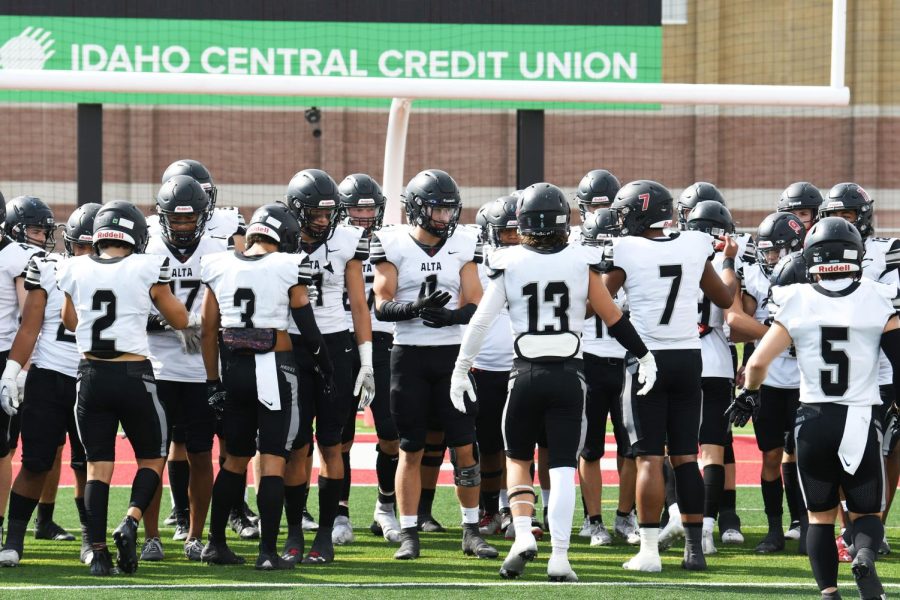 Players prepare to take the field at Sandpoint, Idaho earlier this season. Being part of the team is a huge commitment physically, mentally, and emotionally.

Behind the Scenes, Football Players Push Themselves All Season Long

What does it take to be a member of the football team? Summer practices and daily workouts keep team members in top shape to take on the competition.

The only time that you will see a football player cry is in summer camp.

It starts with the summer training, two practices a day in over 100 degree heat. Players have to wake up at 5:30 a.m. to get to summer conditioning by 6 a.m. They push themselves to their limits before the clock hits 9 a.m. Only then do the players finish running to go inside and have a team lift.

As Coach Teo said, “It is much easier to make the team than it is to stay on the team.” When the day is at its hottest in July, the team is out on the hot turf practicing and preparing for the season. For most practices, the team would have six to seven hours of straight football.

It is much easier to make the team than it is to stay on the team.”

This doesn’t get much better as school starts though, it does quite literally the opposite.

Morning workouts are part of school as well. Players have to change into their school clothes right after they finish the workout. Then they go to the first two periods of the day, only to go back to the weight room for more football training third period.

Once the final bell rings, players have about 15 minutes to get ready for four more hours of football practice after school. This totals to about a 13 hour day at the school.

Wide receiver Garth Weber says “I basically live at Alta.” It seems that the football players only go home to eat and sleep.

The classroom is a whole different story. With the football player stereotype, the team has to be cautious about everything at school, walking around with essentially an administrative target on their backs.

Football players have to follow the grade requirements to stay eligible to play throughout the season. The new attendance policy also makes things more difficult. Players must have 80% attendance or they cannot play.

Running back Anothony Cottis said the schedule he keeps is gruelling. “Its very demanding and difficult, ” he said, “but you can’t beat those Friday night lights.”

Despite all of the hard work, academic musts, and 7-13 hour days, football players do it for those Friday nights. Football is a sport they love.