Robotics Season Ends; Team will Start Up in the Fall 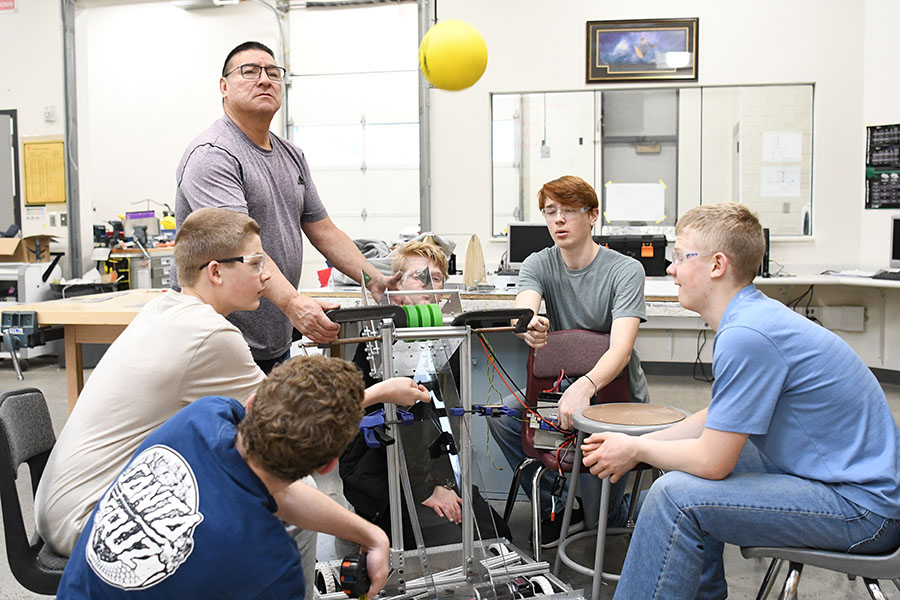 Mr. Ron Strohm and his team test their robot for an upcoming competition.

The 2019-2020 school year was a great year for robotics as they put hard work and determination towards their work for building robots. Among the great students, they have some incredible mentors that help and coach along the way.
The Robotics team went into the building season with strong goals and the will of their teams to build a robot able to win competitions throughout the year. Students spent a lot of time and work to build their robots and created stellar designs for both the rookie and veteran teams.
Sabrina Banh, a member of the Veterans’ Team,  said that sometimes they get behind on building their robot and it’s stressful. “Even though it is somewhat of a challenge and stresses us, it’s still fun,” she said.
It’s an interesting process to watch the robots transform from pieces of metal, bolts, plastic, and miscellaneous parts, to driving trains, along with a shooter, and now on its way up to a lift.
Even though it’s fun to watch something grow from random parts, the thing Sabrina loves most about Robotics is working with the team and the people. “You really get to know them and spend so much time with them. It’s like you gain a second family.”
The students love the moments they can take their robots out for the school to see. The team is a regular site at school events. They love shooting t-shirts into the crowd. More than that, they love competing with other robotics team from other states and within Utah. This year’s Salt Lake City tournament at the Maverick center didn’t end the way the team hoped. They tipped over a competitor’s robot and then lost according to team member Vincent Banh. That didn’t diminish the fun, however. “Just being there with other participants is the best part,” Vincent said. “I like the general atmosphere of big competitions.”

Unfortunately, the Covid-19 Pandemic forced a soft closure of schools, and consequently, their out of state trip to the Idaho competition was cancelled.

The team looks forward to starting the entire process again next year. “Robotics is a year long process,” said Mr. Ron Strohm. “And the hardest fun you’ll ever have.”