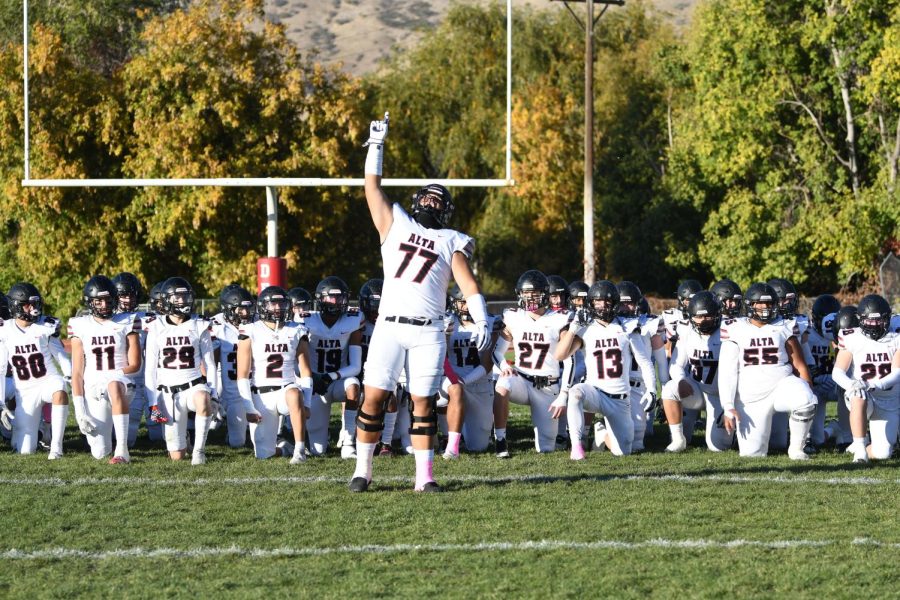 Dressed in “visitor” white, the Hawks prepare to take the field at Springville in the 5A playoffs Oct. 28.

Alta faces Orem in tonight's 5A quarter final matchup. Both teams wish to play another day and make an appearance at Rice Eccles Stadium next Friday.

The football team said they were going to shock some people, and shock they did. The triumphed over number three see Springville 34-27 launching them to the quarter finals this week.

Heading into the postseason, the Hawks knew they were being overlooked which made them realize that they would have to lock in and play as a team to win any games in the playoffs, being ranked below all of their upcoming opponents.

So, the Hawks went on a business trip to Bonneville and upset the Lakers on their home turf. To everyone watching it was an upset, but to the Hawks it was just another Friday at work. Quickly, the Hawks got back to work preparing for their 3rd ranked opponent, the Springville Red Devils. The Red Devils had eliminated the Hawks 3 out of the last 6 seasons, so this game meant a little more to the team.

Before the game, nobody was giving Alta even the smallest of chances.

Until kickoff… The Hawks got started early, scoring on their first drive. The Devils were shocked to say the least, but the Devils offense is their strong point. The Hawks went out on defense, preparing for the highly powered Red Devil offense. Immediately the Hawks shut them down. Forcing the Devils to punt on fourth down.

The Hawks dominated the entire first half, going into halftime 31-0 over the Red Devils. The Devils came out hot in the second half, scoring on a 50+ yard touchdown pass. When the Hawks got back on offense, it seemed that every time the Hawks did something good, the referees would throw a penalty flag.

Quickly, the game started going into a different direction. After a couple more scores the game was 27-34 for the Hawks. The hawks just had to get a first down and let the time run out, but the offense threw an interception in their own territory. Just as things started to look down for the team, the defense came through and stopped the Devils.

The Hawks got the ball back, let time run out and sent the Red Devils home.

Orem might underestimate us because of our last game where we lost. Now we are different team. We hope to practice on Monday for next week’s game.”

Orem is no stranger to Alta. The last meeting of the two teams Orem outscored the Hawks 20-7. They hope to better that score tonight.

Defensive Tackle Garrett Jessop is looking forward to tonight’s game. “Orem might underestimate us because of our last game where we lost,” he said. “Now we are different team. We hope to practice on Monday for next week’s game.”

Both teams will be out for a big win so they can stay on the road for the semi-finals next Friday at Rice Eccles Stadium at the University of Utah. The Hawks are working for that opportunity.