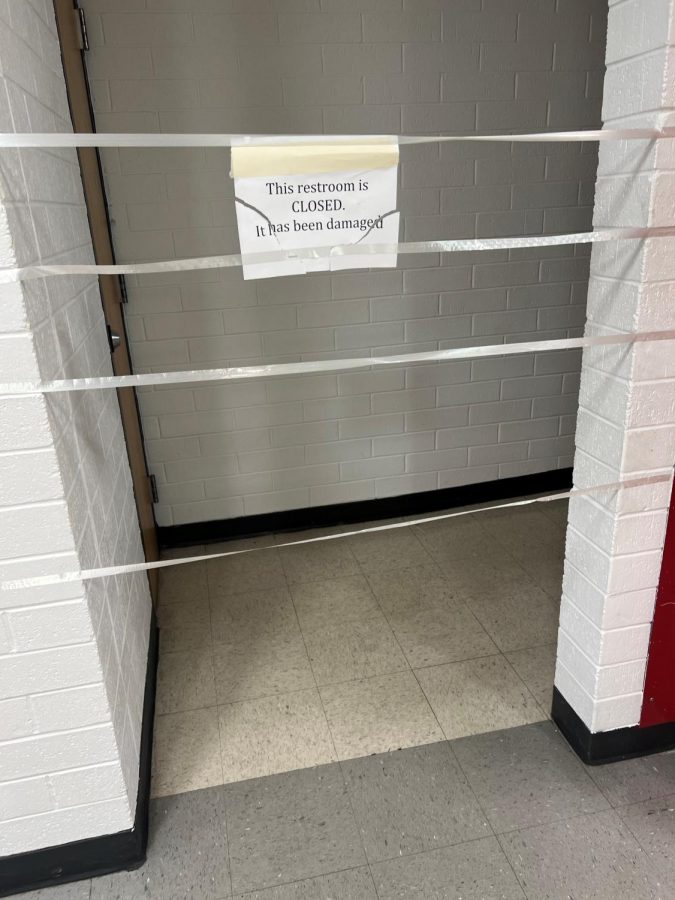 The boy’s upstairs bathroom was closed because of pipe and toilet damage by vandals.

A glance at the state of school bathrooms around the school shows how unkempt they can be. Is it the fault of aging plumbing or students?

Every student has probably been in at least one of the restrooms around the school and noticed the graffiti and broken toilets. Only a few vandals are the cause, and students want it to stop!

Custodians clean the restrooms every single day and need student help to catch those responsible for broken faucets, toilets and graffiti.

According to head custodian Armando Delgado, just a few students create bathroom chaos for the entire school and that keeps custodians busy cleaning up the messes they make.

“Right now, graffiti is the biggest problem in maintaining the cleanliness of the bathrooms,” Delgado said. “Vandals damage the paint and tiles in the bathrooms, and it is also a huge problem.”

Many teachers who have been at Alta for years also cite the students as the cause.

It’s probably more of the students’ fault that the bathrooms are so dirty. It’s not that hard to keep a bathroom clean.”

Teacher Karl Packer, who has been at Alta for 33 years said, for the most part, the floor tiles are the same as they were when first installed in the 1970’s when the school was built.”

On bathroom cleanliness, Packer thought students might treat the bathrooms nicer if they were newer. “Within a week of the completion of the newly remodeled, front bathrooms, they were trashed,” he said.

Principal Rowley said a few students have no respect for the school…Because of COVID-19 and the quarantines, students have been stuck at home with their parents, and have lost respect for school facilities. It’s unfortunate, but some students lack respect for public places, he said.

Many students believe that a solution to these old and dilapidated bathrooms is to renovate. The main office bathrooms are a big example of renovations really making an improvement at Alta. For many, the front office bathrooms and the Performing Arts Center bathrooms are the best and cleanest feeling bathrooms. Many avoid the bathrooms near the gym and by the bus exits, which have been around since the school was first opened.

What happens to students caught vandalizing the restrooms? In extreme cases, punishment for vandalizing and breaking equipment can involve the school officers and legal action from the school.

Students can report vandalism on the safe UT app or by letting staff know.

Until students treat the bathrooms with respect, it’s very likely that they will remain the exact same way.

The bathrooms are cleaned daily, so if students want cleaner bathrooms, they need to throw trash in the garbage, flush toilets, and not break plumbing and fixtures.