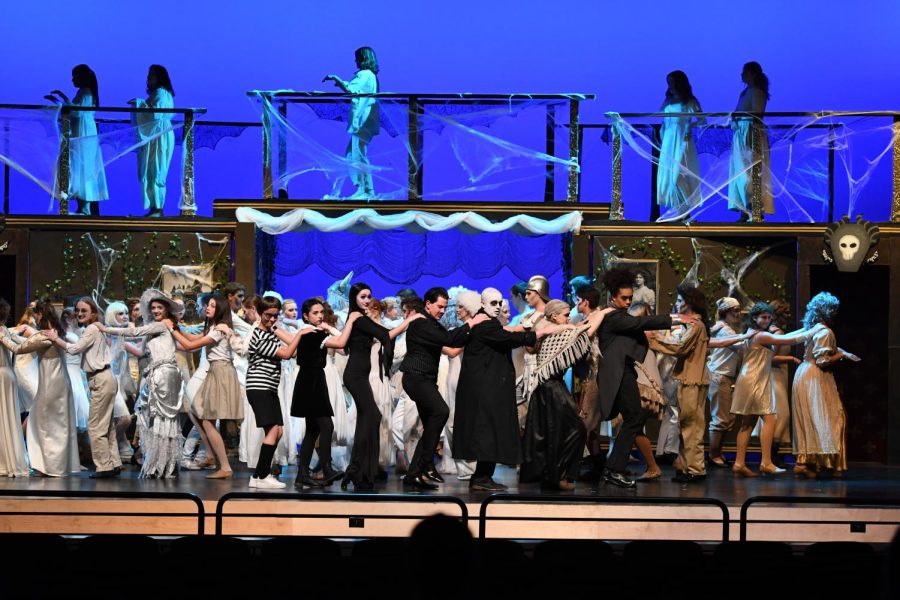 The Addams Family Cast and Ensemble fills the stage to the delight of theater goers.

The show has been widely successful and has been incredibly enjoyable to audiences as Tessa Osborne and Andrew McHenry took the stage as Morticia and Gomez, filling the set with friendly macabre banter.

The show has proven to bring the cast together as they share memories they’ll never forget.  “I enjoy meeting new people, and growing together,” Ella Gardner, who played Wednesday, said. “I love being a part of something this big, and even though it can be hard, going through that together brings people together.”

Theatre has proven to be a great way for students to express themselves and provide an outlet for showing who they truly are.  “I’ve learned how to communicate and lead others during the musical this year,  Andrew McHenry, who played Gomez, said. I have been able to be my weird self on stage and had a blast while doing so.”

Cline said she’s reminded during every production that it is truly a team effort. “It takes everyone to put together a production of this size,” she said.

The production morphed from a script and 90 plus willing performers in September to a polished musical three months later. The cast started as friends and ended as family as implied in the musical: “It’s family first and family last, and family by and by.” The production gave them new experiences which will not only help them in the future but opens unknown opportunities. When your an Addams, death isn’t the only thing just around the corner.