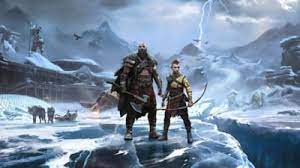 Game Review: God of War Ragnarök Worth the Wait

The wait is over for video game enthusiasts! Santa Monica Studios God of War Ragnarök, the awaited sequel to 2018’s God of War 4 is definitely worth playing.

God of War 4 starts about 1,002 years after God of War 3 when the main character Kratos supposedly dies, but we soon find out he had fled from Mount Olympus after defeating his father, Zeus and somehow made it to the Norse land of Midgard.

At that time he had married again and had a son named Atreus. Unfortunately, Kratos wife dies and we are to take her ashes and spread them on the highest peak in all of the realms which turns out to be a mountain in Jotunheim, the land of the Giants.

On the journey we meet characters such as Mimir, two Dwarvian blacksmiths, the Huldra Brothers Brok and Sindri, a witch in the forest who turns out to be Freya, and the world serpent Jörmungandr. We also fight up to three new gods that we end up defeating. They are Baldur, Modi, and Magni as well as giving classic callbacks to the previous 3 games like the Chaos Blades, and certain lines and stories told in the games dialog and cutscenes. The end of God of War 4 it is revealed that Atreus is half-giant, that the walls of the tallest peak are full of predictions that happen previously in the game, and that the giants had called Atreus something different in the predictions “Loki” as well as showing a future prediction that Kratos might die (again) to Odins hands and Atreus would join odins side. Then the game finishes off with Kratos and Atreus spreading their departed mother/wifes ashes in the wind and the head back to their cabin in Midgard to sleep and prepare for Ragnarök. Where it teases Thor as a character in the next game.

In this game Atreus and Kratos have gotten older, and Atreus wants to know who Loki is and how he is connected to him as well as trying to find Týr the god of war in Norse mythology that was in a prophesy of a way to prevent Ragnarök. Atreus and Kratos are also both being pursued by Freya who is trying to get revenge on Kratos for killing her son (Baldur). All while Odin tries to make “peace” with them in order to find out what happens to him after Ragnarök.

God of War 4 is acclaimed greatly for it’s elements in its story line of regret, struggling as a father to connect with their child, that trying to prevent things could lead to them happening anyway, to not hide from your past, and to “not be sorry, be better.” This game takes those as well as new elements and crafts a new story that still has its roots in the 4th game which connects it to the entire story of God of War. It has a variety of new characters that still connect to the story such as Thor, Odin, Fenrir, Angrboða, Sköll and Hati the wolves of the sun and the moon, Heimdall, Thrúd, Sif, Freyr, and many more.

Not only that, when you play the game you are also connecting the dots on the story as well as waiting in suspension for the ending of the game to see if the prophecy of Kratos Dying is true.

Bear McCreary’s score is incredible as well, composed by the one who also scored God of War 4. The score, with elements of Norse music as well as subtle elements to the previous games, captures the energy of every scene it’s in.  It also includes instruments that are not that well known in the score such as the Hurdy Gurdy.

Overall, I would say this game is just as good, if not better than the original; everything about this game is great, and it made for a great video game experience.

This game is available at Game Stop and available for download from the Playstation console store for around $60.